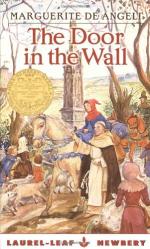 The Door in the Wall Summary & Study Guide

Marguerite De Angeli
This Study Guide consists of approximately 35 pages of chapter summaries, quotes, character analysis, themes, and more - everything you need to sharpen your knowledge of The Door in the Wall.

The Door in the Wall Summary & Study Guide Description

The Door in the Wall Summary & Study Guide includes comprehensive information and analysis to help you understand the book. This study guide contains the following sections:

This detailed literature summary also contains Topics for Discussion and a Free Quiz on The Door in the Wall by Marguerite De Angeli.

The Door in the Wall by Marguerite De Angeli portrays life in medieval England through the eyes of a ten year old boy, Robin de Bureford. The book also chronicles how he overcomes a crippling illness. London is a big city for that time, with many churches, and Robin wakes to the sound of the church bells ringing everyday. Robin also describes other common sounds and smells of that time, such as the sound of armor the knights wear, the smell of the fishmonger, and the children playing in the streets. The first chapter also talks about the plague that is going on in London at this time

Robin's father, an English nobleman, has gone to fight the Scottish wars with Edward III and his mother has been called to be a lady-in-waiting for the Queen. Robin is to foster with Sir Peter de Lindsay as a page and learn to be a knight. His parents think he is cared for while they are gone. However, Robin becomes ill, loses the use of his legs, and is unable to travel such a distance. A family servant cares for him but she leaves him when he slings porridge at her and then she dies of the plague later that day. There are no other servants to care for him because they leave or die because of the plague.

Brother Luke, a friar, hears about Robin's predicament and brings him to St. Mark's where he has to stay in Brother Luke's own quarters. There is not a great deal of room anywhere else because of the plague. Brother Luke nurtures the boy both physically and mentally and tells him that there are many doors in the walls and he just has to find them. Robin eventually understands that the doors are another way of saying he has to find a new path in life due to his lameness.

Brother Luke helps Robin become a stronger, nicer person by learning patience through whittling, as well as by his associations with other people such as the monks. Before his illness, Robin was used to being one of the privileged upper class; but the friar expects him to learn skills and treat others well no matter their allotment in life. Luke never actually disciplines Robin but the boy knows what the friar expects of him and wants to please him, so he is ashamed when he does something bad such as flinging the chisel.

After hearing from Robin's father, John-go-in-the-Wynd and Brother Luke travel with Robin to Lindsay castle. The reader learns more about the times through the descriptions of this journey, and Robin shows courage on this trip when he manages to get out of bed on his own and warn the friar that thieves plan to rob them.

At the castle, Robin shows his bravery when he saves his new friends there by going for help when the castle is under siege by the Welsh. The King awards Robin with a jeweled collar for aiding in saving the castle and Brother Luke tells Robin that he has found his door in the wall. Robin learns how he is useful even without being a knight.

The Door in the Wall from BookRags. (c)2022 BookRags, Inc. All rights reserved.