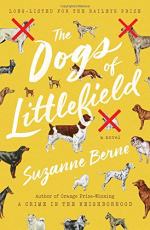 Suzanne Berne
This Study Guide consists of approximately 35 pages of chapter summaries, quotes, character analysis, themes, and more - everything you need to sharpen your knowledge of The Dogs of Littlefield.

The Dogs of Littlefield Summary & Study Guide includes comprehensive information and analysis to help you understand the book. This study guide contains the following sections:

This detailed literature summary also contains Quotes and a Free Quiz on The Dogs of Littlefield by Suzanne Berne.

The following version of this book was used to create this study guide: Berne, Suzanne. The Dogs of Littlefield. Simon & Schuster. First Trade Paperback Edition, January 2017.

The Dogs of Littlefield is a psychological novel by Suzanne Berne which revolves around the lives of the residents of Littlefield, Massachusetts, as they cope with their own daily problems and a string of dog killings. Littlefield, not far from Boston, is home to Warren College. Quiet, staid, nearly all-white, largely secular, wealthy, and liberal, Littlefield has been voted as the sixth best place to live in the country by the Wall Street Journal. This is what attracts cultural anthropology professor Clarice Watkins, from the University of Chicago, to come live in Littlefield for a year while teaching at the college to study the people of Littlefield. Clarice, an African-American, approaches the issue warmly: she is tired of hearing what makes communities go wrong, and wants to find out what makes communities right. Littlefield, because of the feel of the town, becomes Clarice’s subject.

The biggest issue, Clarice discovers, are dual proposals for Baldwin Park. One group of citizens wants to ban dogs from the park while another group wants them to go leash-free. The local paper reminds residents of their progressive views, and urges them to support the leash-free laws. The opposition argues that dog owners are not as tidy as they should be about cleaning up after their dogs, and loose dogs could cause problems. As the debate swirls, Margaret Downing heads to the park with her dog, Binx. There, she discovers a poisoned dog in the woods. She calls for animal control, and then recounts at home what she has seen to her husband, Bill. Margaret worries about what will come, and what their seventh-grade daughter, Julia, will think of everything. Meanwhile, Margaret has an affair with narcissistic local novelist George Wechsler while Bill lusts after Julia’s good friend, Hannah. Julia herself becomes the talk of town when she falls through the ice of a pond trying to reach what she believed to be was a stranded puppy, only for the puppy to disappear.

Next door to the Downings live the elderly Fischmans, who have rented out their carriage house to Clarice. As the months pass, Clarice takes notes, attends town events and functions, and gets to know the people around her. Four more dog deaths follow the first, throwing the town into a near-panic. The suspect is identified as a scruffy-looking young man, leading the police to either ticket, stop, bother, or harass a local Pakistani student, Ahmed, twelve times in a few weeks. Speaking with Clarice, Ahmed explains that the problem with the people of Littlefield is that they complain about problems but do not realize they themselves have problems, and that they are too afraid to do anything to fix any problems.

Clarice, through her studies, comes to realize that she has been wrong about Littlefield, having mistaken a comfortable lifestyle for happiness. She realizes the people of Littlefield are not really different from people anywhere else, even though the residents of Littlefield consider themselves to be better and have insulated themselves against the world. She realizes the town has too many therapists, and is unconsciously racist. She chooses not write about Littlefield. As the novel ends, Bill and Margaret have decided they will attempt to work through their marriage, but Bill is late in getting home.

More summaries and resources for teaching or studying The Dogs of Littlefield.

The Dogs of Littlefield from BookRags. (c)2022 BookRags, Inc. All rights reserved.