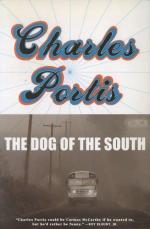 The Dog of the South Summary & Study Guide

Charles Portis
This Study Guide consists of approximately 26 pages of chapter summaries, quotes, character analysis, themes, and more - everything you need to sharpen your knowledge of The Dog of the South.

The Dog of the South Summary & Study Guide Description

The Dog of the South Summary & Study Guide includes comprehensive information and analysis to help you understand the book. This study guide contains the following sections:

This detailed literature summary also contains Topics for Discussion and a Free Quiz on The Dog of the South by Charles Portis.

Raymond Midge is on a mission. His wife, Norma, has run off with her former husband, Guy Dupree, who has become a political radical. Dupree has jumped bail, following arrest for threatening the President, and has taken not only Norma but Ray's credit cards, car and favorite gun as well. Ray has tracked the couple through the credit card receipts and has begun the trip he can ill afford, in order to retrieve his property. He has tracked the couple through Texas and into Mexico, eventually landing in Belize, where Guy's family has a farm. Following him is Jack Wilkie, a lawyer and bail bondsman who is tracking Guy, in order to bring him back to Little Rock for trial. Over the course of his journey, Ray adds a passenger, Reo Symes, a former doctor who has lost his medical license and engages in questionable and illegal schemes, running from those he has scammed and the U.S. postal authorities. Symes is traveling to Belize to convince his missionary mother to deed over to him an island she owns in Louisiana, for which he has several development plans. During his stay in Belize, Ray encounters a myriad of bizarre individuals, to include a young bellboy/entrepreneur, a deceptive hotel manager, Reo's missionary mother, who runs the Unity Tabernacle, a young American mother drifting with her son, and a used car dealer who has bought and stripped Ray's car. Three trips to the Dupree family farm to retrieve his property are unsuccessful for Ray, as Guy holds him at bay with Ray's own gun. Ray eventually resigns himself to the loss of everything and the failure of the trip itself.

Returning to the Unity Tabernacle, after the final trip to the Dupree farm, Ray's departure is delayed by the news that Mrs. Symes has suffered a stroke and by the arrival of a storm of hurricane proportions. Enlisted to assist with the sandbagging operation, Ray finds Jack Wilkie, who has been serving time in the local jail for threatening to kill a local's monkey. He then heads to the hospital, enlisted again to help with the chaos created by the storm. There, Ray finds wife Norma, who has been hospitalized for several days following an appendectomy. Once Norma is nursed back to health, Jack Wilkie agrees to drive Ray and Norma back home, and this trip is at least pleasant and leisurely. Back home, Ray and Norma settle into their old lives. Ray continues his college studies, supported by his father, and Norma becomes restless again. She visits a friend in Memphis, does not return, and Ray decides not to travel the short distance to retrieve her again.

Usually, a novel takes the reader through a series of events leading to a climax, during which the conflicts are resolved and change has occurred. Not so with Dog of the South. Author Portis writes, instead, of the apparent hopelessness of the lives of many people who endure struggles, betrayal, trickery, and random events and yet learn little, so that their lives remain undeveloped and without purpose. Though filled with humor, as one witnesses the ridiculous and bizarre events unfold, Dog of the South can best be described as an American tragedy.

More summaries and resources for teaching or studying The Dog of the South.

The Dog of the South from BookRags. (c)2022 BookRags, Inc. All rights reserved.