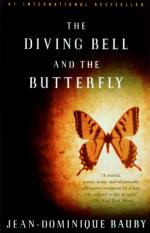 Plot Summary
+Chapters Summary and Analysis
Prologue, The Wheelchair
Prayer, Bathtime, The Alphabet
The Empress, Cinecittá, Tourists
The Sausage, Guardian Angel, The Photo
Yet Another Coincidence, The Dream, Voice Offstage
My Lucky Day, Our Very Own Madonna
Through a Glass Darkly, Paris, The Vegetable
Outing, Twenty to One, The Duck Hunt
Sunday, The Ladies of Hong Kong, The Message
At the Wax Museum, The Mythmaker
Free Quiz
Characters
Objects/Places
Themes
Style
Quotes
Topics for Discussion
Order our The Diving Bell and the Butterfly Study Guide

The Diving Bell and the Butterfly Summary & Study Guide

Jean-Dominique Bauby
This Study Guide consists of approximately 22 pages of chapter summaries, quotes, character analysis, themes, and more - everything you need to sharpen your knowledge of The Diving Bell and the Butterfly.

The Diving Bell and the Butterfly Summary & Study Guide Description

The Diving Bell and the Butterfly Summary & Study Guide includes comprehensive information and analysis to help you understand the book. This study guide contains the following sections:

This detailed literature summary also contains Topics for Discussion and a Free Quiz on The Diving Bell and the Butterfly by Jean-Dominique Bauby.

Jean-Dominique Bauby is a lively, adventurous editor for French Elle magazine. He is in his early forties and enjoying life with his young children when he suffers a massive stroke that leaves him completely incapacitated. Jean's stroke results in a phenomenon known as locked-in syndrome. Jean is paralyzed from the neck down, although he can swivel his head from side to side. His only form of communication is code blinked out with his left eyelid. Despite the seemingly desperation of Jean's life, he brings his own story to the reader with a vitality that belies his immobile state of being.

Jean's stroke hits with a sudden ferocity. He is whisked to a clinic by his sister-in-law and slips almost immediately into a twenty day coma. When Jean finally comes to, he is in Room 119 of the Naval Hospital in Berck-sur-Mer on the French Channel coast. This is the room where Jean will spend the rest of his new life. His days are a slow monotony of baths, speech, and physical therapy, and, if he is lucky, brief trips outside. Most of Jean's time is consumed with letting his mind flitter like a butterfly. In his mind, Jean travels to Hong Kong, remembers pieces of his old life, composing books and plays, and creates elegant meals.

Jean tells of his daily life in the hospital as he undergoes physical therapy that may only bring about the tiniest bit of movement after several years. He works with a speech therapist in the hopes of regaining some control over his breathing and speech. In the meantime, the therapist has reordered the alphabet and developed a communication code especially for Jean. The code is based on the alphabet being organized according to each letter's frequency of use in the French language. Jean blinks his one working eyelid until he reaches the letter desired and then starts again for the next letter in a word. The process is laborious and exhausting and few people actually take the time to learn the code.

Jean's new life is a series of memories and brief visits from those who have not classified him as a vegetable. There is no sense of self-pity or hopelessness in Jean's story. Jean quickly adjusts himself to his new life and works to make the best of it. Jean's story is one of great courage and the power of the human mind. The reader meets Jean-Dominique Bauby, not Jean-Dominique Bauby suffering from locked-in syndrome.