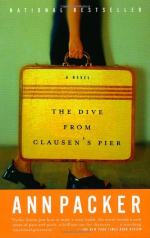 Ann Packer
This Study Guide consists of approximately 42 pages of chapter summaries, quotes, character analysis, themes, and more - everything you need to sharpen your knowledge of The Dive From Clausen's Pier.

The Dive From Clausen's Pier Summary & Study Guide includes comprehensive information and analysis to help you understand the book. This study guide contains the following sections:

This detailed literature summary also contains Quotes and a Free Quiz on The Dive From Clausen's Pier by Ann Packer.

NOTE: This study guide refers to the First Vintage Contemporaries Edition of The Dive from Clausen's Pier by Ann Packer, April 2003. ISBN: 0-375-72713-2

The Dive from Clausen’s Pier, by Ann Packer, tells the story of Carrie Bell, a twenty-three year old woman who is engaged to her high school sweetheart. Unhappy in the relationship, she is considering ending it when her fiancé Mike dives off Clausen’s Pier into shallow water and breaks his neck.

In ICU, family and friends wait for news about Mike’s condition. If he wakes up from the medically induced coma, Mike will have a long rehabilitation period, but he will never walk again. Overwhelmed by Mike’s accident, Carrie is not sure about what she should do and whether any response she has to the accident is the right one. When Mike regains consciousness, Mike’s friend Rooster makes it clear that Mike needs Carrie, but Carrie begins to think otherwise.

At a dinner party hosted by one of Carrie’s co-workers at the library, she meets a man named Kilroy who lives in New York City. Kilroy leaves her a note before he goes back to the New York.

One day Mike confronts Carrie about their relationship. While he still loves her, he realizes that their relationship was strained even before the accident. After leaving the hospital, Carrie gets in her car and decides to leave Wisconsin. She does not tell her friends, including her best friend Jamie, or her family where she is going.

Carrie and Kilroy quickly begin a relationship. She spends a lot of time comparing Kilroy to Mike, acknowledging the differences in their personalities and their sexual appetites. Her relationship with Kilroy is far more physical than she ever was with Mike, but the relationship with Kilroy is not easy. Kilroy is evasive about his past and elements in his life. He does not believe that a person is a sum of the facts about them, and that the act of being together is enough to know someone.

Carrie finally reaches out to people back home, but is not ready to return to Wisconsin. She thinks about getting a job and begins to take fashion classes at Parsons. After Carrie learns that Rooster is getting married, she agrees to come home for the wedding, but at the last minute changes her mind.

When Carrie finally decides that she should go back, she tries to reconnect with Mike. She feels guilty about how she left him, but wants to continue her relationship with Kilroy. She asks Kilroy to join her in Wisconsin, but he tells her that his place is in New York.

While Mike and Carrie do not get back together, Carrie slips her engagement ring on her right hand and tells Mike that it is now a friendship ring. She decides to stay in Wisconsin to be there for him.

More summaries and resources for teaching or studying The Dive From Clausen's Pier.

The Dive From Clausen's Pier from BookRags. (c)2022 BookRags, Inc. All rights reserved.