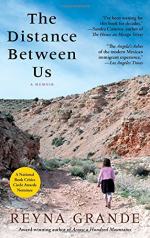 The Distance Between Us: A Memoir Summary & Study Guide

Grande, Reyna
This Study Guide consists of approximately 48 pages of chapter summaries, quotes, character analysis, themes, and more - everything you need to sharpen your knowledge of The Distance Between Us.

The Distance Between Us: A Memoir Summary & Study Guide Description

The Distance Between Us: A Memoir Summary & Study Guide includes comprehensive information and analysis to help you understand the book. This study guide contains the following sections:

This detailed literature summary also contains Topics for Discussion on The Distance Between Us: A Memoir by Grande, Reyna.

The following version of this book was used to create this study guide: Grande, Reyna. The Distance Between Us: A Memoir. New York: Atria Books, 2012.

Reyna Grande’s memoir opens in 1980 in Mexico. Four-year-old Reyna says goodbye to her mother, Juana, who is going to join her husband, Natalio, in America, who left two years ago. Reyna positions herself as one of many children who experienced abandonment due to the powerful pull of the American Dream; thousands of families are broken when immigrants leave for El Otro Lado (the Other Side) in search of opportunity. Reyna and her older siblings, Mago and Carlos, are sent to live with their cruel and abusive paternal grandmother, Abuela Evila, and they go hungry, are constantly covered in dirt, and dressed in rags. Their hair is full of lice and their abdomens swell with roundworms. The children turn to each other in their grief as they yearn for their parents’ return and are taunted by local children for being like little orphans.

After discovering her husband is cheating on her with a Mexican-born American citizen named Mila, they have a terrible fight and Juana is kicked out of their apartment. She manages to kidnap their new infant daughter Betty and runs back across the border. The children are shocked when their Mami returns to them after three years of separation and they quickly discover that the woman who returns to them is not the same woman as she once was. Now, she is bitter, heartbroken, and emotionally reserved. Nevertheless, they are thrilled to have their Mami back and they all move to their maternal grandmother’s house’s house. Abuelita Chinta is kind and caring and when Juana decides to leave them once again with her new boyfriend, the children continue to live with her.

As Abuelita Chinta’s resources are stretched too thin and the family suffers from great poverty, Mago puts her education in jeopardy and finds a job to help pay for necessities, such as little Betty’s medication when her face is burned. After Mami’s boyfriend is killed in a car accident, she returns home broken-hearted once again. She attempts to secure a plot of land the government is giving away so that they can build their own little house, but the endeavor fails, and she becomes even more bitter. She decides to move in with her sister downtown near the record shop she works at. Soon, she disappoints her children again by bringing her new boyfriend Rey to their Christmas celebration, a day that was meant to be special and spent as a family. She decides to leave with him. Mago writes to their Papi, pleading with him to come back for them, and they are shocked when after all these years, they find him at Abuela Evila’s. The three older siblings convince him to bring them all back with him, and after two failed attempts at sneaking across the border, they finally arrive in Los Angeles terrified, hungry, and excited about their new future.

They arrive in 1985 and Reyna begins fifth grade, Carlos seventh grade, and Mago eighth grade. They struggle to assimilate but as they learn English and become accustomed to their new home, they begin to find their way. However, they quickly discover that their Papi—who they idealized as children as a hero that would rescue them—is a violent and tyrannical alcoholic. He sets strict household rules and impresses in his children a strong belief in education and the opportunities that living in America affords them. Their stepmother Mila is kind and takes good care of her new stepchildren, but they never fully bond because Mila resents their new place in her life after becoming estranged with her own children by the breakdown of her first marriage.

As the children enter adolescence, their father becomes increasingly abusive, often beating Reyna until she bleeds. But at other times, he has moments in which he speaks to them about how they will make him proud by getting an education and fulfilling his American Dream. Their dynamic is complex and emotionally fraught. They soon discover that their Mami returned to Los Angeles with Rey several months ago without reaching out to them, yet despite this betrayal, they insist on being reunited with her and they begin visiting her on weekends in the cramped apartment she rents on welfare.

By 1990, Mago is the first in the family to be awarded her high school diploma and makes her father proud by going to college. Reyna starts high school, struggles to make friends, and finds herself being used by boys at school who do not want to commit to a relationship with her. She turns to books, which act as an escape for her, and joins the marching band. At home, Papi is still abusive, and eventually, Mago starts to resent financially contributing to the household and living under his strict rules. She soon drops out of college to work full time to pay for the clothing, makeup, new car, and other luxuries she feels like she needs after living years in poverty. Meanwhile, Carlos drops out of college to marry his girlfriend and they have a child. Then, Mago moves out and becomes estranged from their father, and he is disappointed in her for throwing away the opportunities he fought so hard to give her. He is furious when he learns she is expecting a baby too.

Meanwhile, Reyna feels abandoned at home alone with her father, without the support and company of her siblings. Her father takes out his anger at his eldest children on her and continues to physically and emotionally abuse her. He forces her to give up her acceptance to the University of California, Irving, and she becomes discouraged. She loses her virginity to a boy that pressures her for sex and nearly finds herself in serious trouble seeking work in unsafe conditions. She is determined to turn her life around and decides to enroll in Pasadena City College. Her English professor, Dr. Diana Savas, recognizes a talent for writing and a potential for greatness in Reyna. She pushes her to focus on school, and when problems at home escalate and her father begins to also abuse her stepmother, resulting in his temporary arrest and a restraining order, Diana offers Reyna a refuge in her home. They begin to plan her future and she is accepted to University of California, Santa Cruz, on a scholarship. Meanwhile, she has continued to develop her writing skills in journalism competitions and essay contests, and when Diana introduces Reyna to the genre of Latino literature, she discovers a literary world of stories and characters she can identify with. She spends the last summer before college with her father, and in Mila’s absence, she lifts his broken spirits and they form a closer bond as his abuse subsides.

Reyna triumphs in the end by achieving her professional dreams—she becomes an ESL teacher so she can inspire the next generation of immigrant children as well as a published author—and forms her own family as a wife and mother. In the end, by 2010, her father dies of liver cancer and the family is reconciled over his death bed. Throughout her life, Reyna never gave up on her family and on pursuing her dreams, and the memoir concludes with this message of hope, of forgiveness, and of the promise of opportunity.

More summaries and resources for teaching or studying The Distance Between Us: A Memoir .

The Distance Between Us: A Memoir from BookRags. (c)2022 BookRags, Inc. All rights reserved.