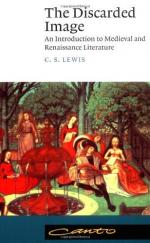 The Discarded Image: An Introduction to Medieval and Renaissance Literature Summary & Study Guide

The Discarded Image: An Introduction to Medieval and Renaissance Literature Summary & Study Guide includes comprehensive information and analysis to help you understand the book. This study guide contains the following sections:

This detailed literature summary also contains Topics for Discussion and a Free Quiz on The Discarded Image: An Introduction to Medieval and Renaissance Literature by C. S. Lewis.

The beliefs of the Medievals might in some respects resemble those of less civilized peoples. What distinguishes them, however, is that while the beliefs of "barbaric" peoples are ultimately derived from their immediate environments, the Medievals were almost obsessed with books, and their beliefs can all be traced to the authority of some author, for better or worse. Many of these writers, like Cicero and Lucan, were not even Christians, though many were such as Boethius and so-called Pseudo-Dionysius.The contributions of these authors can be as simple as descriptions of the physical universe or as abstract as the formulation of natural laws. Apuleius, an ancient Pagan, provided two such natural laws which proved essential to the Medieval understanding of the world. The first is called the principle of plenitude, which states that every region of space is filled with beings. This would greatly inform the Medieval understanding of angels and demons. The second principle is known as the principle of the Triad, which is somewhat more abstract. In essence, it states between two very different things, there must be a third thing which mediates between them. Thus, since humans and God are utterly different, it is necessary to have angels, which are somewhere between human and Divine, to mediate to them.

The Medievals more or less accepted the astronomical beliefs of the Pagans. They believed that the Universe was a series of enormous spheres centered around the Earth. In the sphere of Nature—the region below the orbit of the moon—beings are subject to change and destruction; in the upper spheres, they are perfect and unchanging. Contrary to what is often believed, the Medievals, with few exceptions, did not believe the Earth was flat, though they did believe the equator was so hot that travel to the southern hemisphere would be forever impossible, which possibly explains why exploration was stifled for so long. The upper spheres were demarcated by the orbits of the planets which, they believed, exerted a predictable influence both on inanimate matter and on the actions of men, leading to the belief in astrology. The uppermost sphere was where the first mover dwelt, who was moved directly by God and, in turn, moved the lower spheres.

Regarding the inhabitants of the Earth, many Medievals, though not all, believed in the existence of mythical, sentient creatures like elves and centaurs, though these beliefs fell into obsolescence in later periods. While knowledge of domestic animals like pigs or cows was quite good—since people often made their livelihood from these—people were unsurprisingly quite uninformed about animals in other parts of the world and believed in the existence of such animals as the Unicorn or Phoenix.

All living creatures, the Medievals believed, possessed a soul, though what kind of soul they possessed depended upon the type of being. Plants possess only a vegetative soul, which governs unconscious functions like growth or metabolism. Irrational animals possess a sensitive soul, which grants them the ability to perceive their surroundings. Humans, the "rational animal," possess a rational soul which enables the functions of reasoning and understanding.

The peculiar qualities of Medieval literature can be largely attributed to their attitude towards the universe as they understood. In short, they were in love with the universe, and so were often content merely presenting it as it is (or, rather, as they thought it was), which can make their writing seem dull and repetitive to the modern writer. In fact, the content had such a primacy for the Medieval mind that the author was, in some ways invisible, to such an extent that later writers thought nothing of borrowing heavily from previous writers, since the notion of artistic ownership did not exist.

The Discarded Image: An Introduction to Medieval and Renaissance Literature from BookRags. (c)2022 BookRags, Inc. All rights reserved.