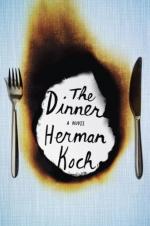 The Dinner Summary & Study Guide includes comprehensive information and analysis to help you understand the book. This study guide contains the following sections:

This detailed literature summary also contains Quotes and a Free Quiz on The Dinner by Herman Koch.

The Dinner is a novel by Herman Koch. In this novel, two couples meet for dinner. One man is a successful politician, one his brother. The two couples are meeting to discuss the actions of their sons. The brother, Paul, avoids the discussion all night as his resentment of his successful brother grows and grows. Finally, Paul finds himself caught in the middle of a conspiracy that he cannot get out of. Not that he would want to. The Dinner is an interesting study in human nature that asks the question, what would you do to protect your child?

Paul and his wife walk to a diner near their home for drinks before going across the street to meet Paul’s brother, Serge, and his wife, Babette. As they talk, Paul recalls finding some videos on his son’s cellphone that have left him deeply disturbed. Paul debates talking to his wife about it, but decides against it.

Paul and his wife, Claire, walk across the street to the restaurant a half hour late and discover that Serge and Babette still have not arrived. Paul is annoyed by this, assuming it has happened because Serge likes to make an entrance. Serge is a politician. In fact, Serge is the top candidate for the Prime Minister’s election in seven months.

When Serge and Babette arrive, they cause exactly the stir that Paul has expected. Conversation is difficult because Paul dislikes everything that comes out of Serge’s mouth. Paul gets up to go to the bathroom and is interrupted by a man who wants to know if he and his daughter can have their picture taken with Serge.

When Paul returns to the table, he finds Babette and Serge arguing. Babette gets up and leave. Claire follows. In their absence, Serge tries to speak to Paul about their sons, but Paul calls over the man from the bathroom as an interruption. Then Paul goes outside to find Babette and Claire.

While outside, Paul discovers that he has his son’s phone. When the phone rings and shows Claire’s face, Paul answers it. It is his son, Michel, calling from home. Paul tells Michel he has his phone, so Michel arranges to come to the restaurant. Paul goes into the restroom again to look at Michel’s phone. Paul notices that Michel has several messages, but he does not want to listen to them and alert Michel to the fact that he has looked at the phone. However, while waiting outside, Paul decides to listen to the messages anyway.

The dinner continues. Paul avoids speaking about the boys until desert. Serge then brings it up. Serge announces that he thinks that he should withdraw from the political campaign. Babette begs Claire and Paul to talk him out of it, but Serge will not listen. Serge then takes a phone call and leaves. Claire makes a point of having Babette check the time more than once before she calls Michel. When Babette and Serge leave, Claire tells Paul that Michel was not home, that she did that to establish an alibi for Michel. Claire has instructed Michel to stop Beau from publicizing the videos any way he can.

Paul and Claire talk about Serge’s decision to pull out of the political race and turn Rick into the police. Claire wants Paul to injure Serge to stop him. Paul argues that it cannot be him because of his unstable mental health history. Claire does it instead by hitting Serge in the face with a glass.

Serge does not turn in the boys and he does not withdraw from the political race. However, he loses the race. Beau has gone missing. Paul is closer to his wife and child than ever before.