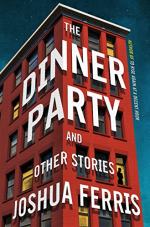 Plot Summary
+Chapters Summary and Analysis
The Dinner Party
The Valetudinarian
The Pilot
A Night Out
The Breeze
Ghost Town Choir
More Abandon (Or Whatever Happened to Joe Pope?)
Fragments
The Stepchild
Life in the Heart of the Dead
A Fair Price
Free Quiz
Characters
Symbols and Symbolism
Settings
Themes and Motifs
Styles
Quotes
Order our The Dinner Party Study Guide

Joshua Ferris
This Study Guide consists of approximately 53 pages of chapter summaries, quotes, character analysis, themes, and more - everything you need to sharpen your knowledge of The Dinner Party.

This detailed literature summary also contains Quotes and a Free Quiz on The Dinner Party by Joshua Ferris.

The following version of this book was used to create the guide: Ferris, Joshua. The Dinner Party. Kindle edition. Retrieved from amazon.com.

The Dinner Party and The Breeze both have couples that are distant from each other. The Dinner Party explores this distance by showing the contrast between the husband and wife, Amy, while they prepare for a dinner party. Amy has invited her oldest friend and husband over. While she is preparing for the party, her husband does not help her and complains about the predictability of her friends. When they do not show up, he goes to their apartment and discovers they are having a party. Amy’s friend expresses her dislike of the husband and tells him that she has nothing in common with Amy anymore. He goes home, lying to his wife telling her that her friend forgot about the dinner. When Amy starts packing a bag to leave him, he holds her but feels her distance. The distance between Jay and Sarah in The Breeze is explored in a different way. This story provides different alternatives to how their day could go. In a lot of the stories it shows their inability to communicate about their needs to each other. They appear unhappy as Sarah is anxious to find the best thing to do and worries that she is letting life pass her by while her husband is content to do anything.

A Night Out and Fragments explore infidelity and the impact this has on the couples. Sophie runs away from her husband, Tom, in A Night Out, following his mistress. She skips her plans to meet her parents for dinner, deciding instead to pick up a man in a bar. While Tom attempts to contact his wife, he realizes she has cancelled his cards. He gets his father in law to help him and tells his in laws that he had Sophie had a fight over the hours she works. Her parents discover the truth however when they encounter another one of Tom’s ex mistresses. In Fragments, the husband gets an accidental call from his wife while she is talking to another man. It is clear from what is heard that she is cheating on him. While he goes about his life, the narrator interrupts his story with the conversations he overhears on the streets of New York. The husband is grieving and wondering what to do with all the joint possessions of his marriage. In the end he yells onto the street below, telling strangers of his wife’s infidelity and giving away their things.

Ghost Town Choir, The Stepchild and A Fair Price examine the effect of childhood trauma. Bob in Ghost Town Choir has an unstable childhood. This story follows the breakup of his mother and her recent boyfriend, Lawton. His mother, Sheryl Lynn, goes about painting the house and cleaning. However her renovations make the house messier and more unlivable. Bob takes Lawton’s records over to him and it is clear he wants him as a father. When he returns he finds that his mother wants to go on a trip somewhere. Nick from the Stepchild is deeply affected by his unstable childhood where his parents were constantly divorcing and remarrying. He fears his wife has left him and goes to the apartment of a woman he just met. They kiss and he tells her they will start a life together. When he returns home, his wife is there and realizes that he has repeated his usual patterns again. Jack from A Fair Price, terrorizes Mick, a man he hired to help him move. Mick reminds him of his abusive stepfather and he is convinced Mick hates him and is violent. When Mick senses something is wrong with Jack, he refuses to continue working. Jack punches him in the throat and realizes he needs to go to hospital.

The Valetudinarian, The Pilot, More Abandon and Life in the Heart of the Dead all explore characters that are not making the most of their lives. Arty from The Valetudinarian has been living his life on his couch after the death of his wife. It takes a near death experience to make him realize he is not living. In The Pilot, Leonard is crippled by his anxiety. He is unable to enjoy himself or be socially effective without donning a costume and consuming alcohol. He realizes the ridiculousness of his overthinking when he jumps in a pool after setting himself on fire from a lit cigarette. Joe Pope wants to take a break from his responsible nature in More Abandon. He stays over night in his office building, declaring his love for a coworker over voicemail and switching the décor in his coworkers offices. The protagonist from Life in the Heart of the Dead realizes he has not lived a good or fulfilling life. His tour around Prague makes him realize he has lived selfishly and that his living history in the minds of those that know him is nothing to be proud of.

More summaries and resources for teaching or studying The Dinner Party.