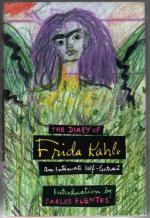 Frida Kahlo
This Study Guide consists of approximately 22 pages of chapter summaries, quotes, character analysis, themes, and more - everything you need to sharpen your knowledge of The Diary of Frida Kahlo.

The Diary of Frida Kahlo: An Intimate Self-portrait Summary & Study Guide includes comprehensive information and analysis to help you understand the book. This study guide contains the following sections:

This detailed literature summary also contains Topics for Discussion and a Free Quiz on The Diary of Frida Kahlo: An Intimate Self-portrait by Frida Kahlo.

The Diary of Frida Kahlo contains reproduction of Mexican artist and intellectual Frida Kahlo's "journal in-time," or private diary that she wrote for approximately the last ten years of her life, from 1943 to 1954.

An Introduction by noted Mexican writer Carlos Fuentes describes the one time that he saw Frida Kahlo in the flesh at a performance in Mexico City. Fuentes goes on to speak about the cultural and historical context that shaped Kahlo. The many things that impacted Kahlo's work include the Mexican Revolution, Pre-Columbian South American culture and iconography, her grandfather who was a photographer, and the Communist revolutionary movement, among other things.

Unfortunately, the biggest impact on Kahlo's writing and art was her almost constant agony suffered as a result of a streetcar accident she suffered as a young woman. This accident, which nearly killed her, left her body broken and she required dozens of surgeries in the decades following.

The journal itself is a collection of doodles, poems, letters, sketches of what would later become full paintings, and cryptic little phrases and notes. A frequent topic is Kahlo's love for Diego Rivera, her husband and famous Mexican muralist. Kahlo's writing is highly fragmentary and rarely makes literal sense. Rather, Kahlo depends more upon "automatic writing" techniques, in which she makes free associations between words, letting her imagination dictate the text.

The diary is half-writing and half-image. Images include Aztec-style pyramids, figures with wings, monstrous amalgamations of nude bodies, and Kahlo's own dogs. Images also include many self-portraits that made Kahlo famous. Kahlo might show herself in a pool of blood, or cut off at the midsection, shattered, or with her organs external to her body. These paintings depict and understand her own pain and despair at her multiple physical infirmities. A specific body part that she continually depicts is the right foot. This foot is a particular problem for Kahlo. As the journal nears its end, Kahlo learns that her gangrenous foot must be amputated. Kahlo frequently draws the foot or her own figure missing the foot as a way to deal with the obvious trauma of amputation.

As the journal goes on, there is a detectable slide in Kahlo's mood as she slips further into illness and closer to her own mortality. Her handwriting even gets sloppy during particularly difficult episodes and in certain dark moods, Kahlo paints very bleak images of rot and death. The final image of the diary and presumably of Kahlo's life is a chaotic maelstrom of color surrounding an angel figure with wings.

More summaries and resources for teaching or studying The Diary of Frida Kahlo: An Intimate Self-portrait.

The Diary of Frida Kahlo: An Intimate Self-portrait from BookRags. (c)2022 BookRags, Inc. All rights reserved.