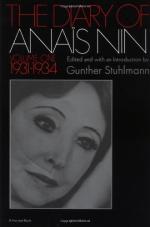 The Diary of Anaïs Nin Volume One Summary & Study Guide

Anaïs Nin
This Study Guide consists of approximately 31 pages of chapter summaries, quotes, character analysis, themes, and more - everything you need to sharpen your knowledge of The Diary of Anaïs Nin Volume One.

The Diary of Anas Nin Volume One Summary & Study Guide includes comprehensive information and analysis to help you understand the book. This study guide contains the following sections:

This detailed literature summary also contains Topics for Discussion on The Diary of Anas Nin Volume One by Anaïs Nin.

Anais Nin, although clearly not one of the thought leaders of the 20th Century, prefigures in her diaries the advent of modern feminism while at the same time remaining very much a part of the traditional patriarchal paradigm. She is capable of describing a world where women would be treated fairly, paid fairly, and respected as individuals in their own right while depriving herself of the necessities of life to advance money to Henry Miller and other male literary friends. For a good part of her life, she supported herself by writing erotica, which receives only passing notice in her diaries. Her diaries are themselves vivid portraits of the expatriate Parisian literary life in the early- and mid-20th Century, and she demonstrates the empathy, insight and descriptive powers that could have made her a great novelist. She seems primarily a transitional figure in the evolution of women's consciousness from George Elliot to Susan Sonntag, but worthy of respect because of her facility with language as well as her premonitory abilities to see into the future.

Her diaries capture the essence of people long dead who come to life in her prose. The reader is carried along with Nin as she experiences—perhaps in what might today be called codependency—the dramatic ups and downs of her friends and acquaintances. Perhaps her limitations as a writer could be defined as results of low self-esteem, certainly not shocking among women of her generation. She seems more comfortable in the role of a nurturing, supportive maternal role to other writers, mostly men, and unsure of her own work work and importance although the diaries reveal an original and inventive mind. She displays a firm grip on the elements of writing in a letter to a poet friend where she makes a clear and persuasive argument that distinguishes poetry from prose, saying that poetry involves a "transmutation" of the physical and concrete into metaphor, imagery, the metaphysical. "Prose is pedestrian, poetry is flying. Poetry is the myth created out of human elements. The physical aspect in poetry has to be transfused with meaning."

More summaries and resources for teaching or studying The Diary of Anas Nin Volume One.

The Diary of Anaïs Nin Volume One from BookRags. (c)2022 BookRags, Inc. All rights reserved.