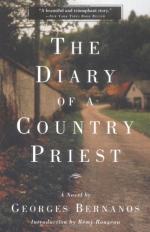 The Diary of a Country Priest Summary & Study Guide

Georges Bernanos
This Study Guide consists of approximately 47 pages of chapter summaries, quotes, character analysis, themes, and more - everything you need to sharpen your knowledge of The Diary of a Country Priest.

The Diary of a Country Priest Summary & Study Guide Description

The Diary of a Country Priest Summary & Study Guide includes comprehensive information and analysis to help you understand the book. This study guide contains the following sections:

This detailed literature summary also contains Topics for Discussion and a Free Quiz on The Diary of a Country Priest by Georges Bernanos.

The Diary of a Country Priest by Georges Bernanos is a story of injustice and faith that passes the barriers of time. In the novel, a young, unhealthy priest keeps a journal during the time he serves in his first parish. Although his parishioners treat him unkindly, gossip about him and misinterpret his actions, the priest remains faithful to God and serves the parish to the best of his ability. In the end of the story, the priest dies of stomach cancer. Before his death, however, the priest learns the mysteries of grace and loving oneself.

The priest, who is never given a name, begins his appointment to the parish of Ambricourt, France with high hopes for both himself and his parishioners. He plans to visit his parishioners are least once every three months, start a young man's sporting guild and teach the children of the parish the catechism as well as performing his other priestly duties.

Soon, the reality of life in the French countryside sets in for the priest. The priest feels tricked when a grocer offers to send him three bottles of wine, and then charges the priest for them. A member of the community commits suicide. Although the priest hopes the children's catechism class will be a comfort to him, even that is marred by one child who delights in entertaining the rest of the children by doing and saying things to embarrass the priest. In addition to these challenges, the priest's health is not good. He has lost weight drastically and finds he can eat nothing but bread soaked in wine without upsetting his stomach.

Soon, a drama involving the most prestigious family in the neighborhood begins to unfold before the priest. Mlle Louise, the governess at the Château asks the priest to approach her employers about sending Mlle Chantal, the oldest daughter, to a finishing school. The priest feels he shouldn't become involved in the family's personal life, but after he is visited by Mlle Chantal, he feels he has no choice. The priest approaches Mme la Comtesse about the problems her daughter spoke to him about and accuses the lady of not loving her daughter. The priest then learns that Mme la Comtesse once had a son who died at the age of 18 months. She has mourned the boy ever since his death. Also following the death of the infant, her husband and daughter became inseparable. The tow largely ignored Mme la Comtesse and her wishes. Even worse, Mme la Comtesse admits she is aware that her husband has been unfaithful to her. All of these factors have worked together to make Mme la Comtesse very hardened and callous to towards God.

The priest helps Mme la Comtesse work through her problems and following his visit, Mme la Comtesse writes the priest a letter stating she now feels at peace with God and is grateful for his assistance. Unfortunately, Mme la Comtesse dies later that night from an apparent heart problem. Her death leaves many unanswered questions about her encounter with the priest especially since Mlle Chantal eavesdropped on the conversation through an open window and is now spreading rumors that the priest's actions brought on her mother's death. Although things seem as bad as they could possibly be for the young priest, he hangs onto his faith and continues to serve his parish as best he can.

As a result of his worsening stomach problems, the priest makes an appointment to see a doctor in Lille. Before he leaves, he makes a sort of peace with both the child who tormented him in catechism class as well as Mlle Chantal. In Lille, the doctor diagnoses the priest with stomach cancer. Not sure where to go after this stunning diagnosis, the priest decides to visit an old friend from seminary. After the two talk awhile, the priest isn't feeling well so he accepts an offer to stay at the friend's home for the evening. The priest dies that night. Although a priest can not be found quickly enough to give the priest his last rites, the priest's dying words are, "Does it matter? Grace is everywhere."

More summaries and resources for teaching or studying The Diary of a Country Priest.

The Diary of a Country Priest from BookRags. (c)2022 BookRags, Inc. All rights reserved.