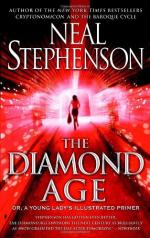 This detailed literature summary also contains Topics for Discussion and a Free Quiz on The Diamond Age, or, Young Lady's Illustrated Primer by Neal Stephenson.

The Diamond Age is a science-fiction novel that anticipates the development of nanotechnology and reflects on its social consequences. The action revolves around three main characters: Nell, a little girl who grows up to become an important player in her world with the help of a "magical" storybook; John Percival Hackworth, the author and software engineer behind the book; and finally, Miranda, an actor who provides the interactive voice for the characters in the book and who forms a bond with the reader through the book's networked interface. The novel takes place on the coast of the Pacific Ocean, near the Asian continent. The Diamond Age is set in the later part of the twenty-first century, although no exact time reference is provided. The novel also examines the potential for social divisions in a world where there is no country and where the rules of the free market determine the fate of society.

The story starts on an artificial island located in the South China Sea, named Atlantis/Shanghai. This island hosts an enclave for the most powerful and wealthiest tribe on earth: the Victorians. The aristocratic Victorians own most of the companies that provide the consumer goods and real estate to the rest of the world. They differentiate themselves by speaking a sophisticated yet somewhat outdated form of Victorian English and by using "real" material. John Percival Hackworth, a high-level engineer working for Bespoke, is also a Victorian. He is hired by Lord Alexander Finkle-McGraw to write a book for his four-year-old granddaughter Elizabeth. The book is supposed to be unique, but the author decides to make a copy for his own daughter. This copy gets stolen and falls in the hands of a little girl with no social status named Nell.

With the help of the "magical" book, Nell starts to learn to read, write, and exercise her judgment and her body. However, her family situation deteriorates quickly and she is forced to flee her home along with her brother, who had given her the book in the first place. Nell moves to Dovetail, a community of artisans working to produce goods for the Victorians. She starts to study at an academy attended by the upper class Victorians. She becomes friends with two other girls who also own the magical book, Elizabeth and Fiona.

During this time, Hackworth's trickery gets him in trouble with the law and he is sentenced to ten years. Hackworth's sentence is suspended after he agrees to work for the tribe that put him on trial. After getting the book and giving it to his granddaughter Elizabeth, Lord Finkle-McGraw discovers that the book is no longer unique and that it the code that produced it is in the hands of a counterfeiter working in Shanghai, named Dr. X. The old Lord confronts Hackworth, but the latter avoids getting dishonored after agreeing to work as a double agent for the Victorian authorities. Hackwork is sent to Vancouver to look for "the alchemist." He ends up living with the Drummers tribe for ten years in a dream-like state while participating in continual orgies involving strange rituals.

Miranda wanted to become a "ractor" (an actor specialized in interactive theater and movies). However, after becoming increasingly involved as the voice of Nell's interactive book, she starts to develop a motherly bond with the girl, even though she never addresses her directly. She does not even know her real identity. She decides to seek the girl and she is eventually led to join the Drummers in the hope that this will help her reach out to the girl.

Hackworth leaves the Drummers' cave and attempts to contact his now grown up daughter. He discovers that he is now divorced. His wife rejects him but his daughter Fiona runs away from her mother and joins her father in his quest to understand the essence of the revolution that is brewing and to save the Victorians' heritage.

Nell finishes her formal training at the Victorian academy and starts working at an Asian brothel, providing scripts for interactive adult games to the girls. Most of the girls are members of the Han tribe and have been raised with the same book, though their copies do not rely on live ractors and they were adapted to the Chinese culture. The girls eventually form a tribe of their own, this time led by Nell. In the hope of reaching her mother, Nell reaches out to the Drummers. She escapes death through defense mechanisms that she designed to fight the drugs used by the Drummers. In the end, she manages to save Miranda before she suffers the explosive fate that awaits the Drummers' ritual victims.