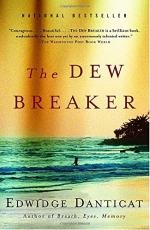 This detailed literature summary also contains Quotes and a Free Quiz on The Dew Breaker by Edwidge Danticat.

The Dew Breaker is a novel of connected short stories by Edwidge Danticat. The stories center around the Haitian expatriate community in New York. The Haitians' lives have been forever changed by the dictatorship which drove them out of Haiti. Key to the refugees' lives unfolding in Brooklyn is the never-named father of Ka Bienaime. Ka,'s father had worked as a “dew breaker” or torturer for the Haitian government. The man now lives a quiet life as a husband, father, barber, and landlord. Ka’s father is haunted by the things he has done in his past life –things which include outright murder of innocent people. He does his best to forget by focusing on his life in the present. When Ka creates a sculpture of her father, he throws it in a lake because he does not want a physical memorial of himself left behind. Ka herself wonders how her mother, Anne, could possibly love her father, while her mother explains it is because he is a different man than he was in the past.

There are three men who rent rooms from Ka’s father –Michel, Dany, and one unnamed. The unnamed man has spent seven years in America working hard to bring his wife over. He has missed her dearly, but when she finally arrives, the emotional distance between them grows. Michel reflects sadly on how his childhood best friend, Romain, disappeared in the chaotic violence that followed the abdication of Haiti’s dictator. Dany returns home to visit Haiti to inform his Aunt Estina that he believes he has found the man responsible for killing his parents (Ka’s father) in New York, but Aunt Estina believes Dany’s parents were mistaken for someone else and killed. The same thought plagues Dany’s mind that Ka’s father may not actually be who he seems to be, so Dany does not kill him.

Elsewhere, Nadine Osnac, sent to America by her parents for a better life, struggles with an abortion she had forced by the hand of her now ex-boyfriend, Eric. Nadine, a nurse, is unable to bring herself to talk to her own parents, and realizes she herself should be a mother by now. Beatrice Saint Fort, a famed local bridal gown maker, is interviewed by Alina Cajuste for a Haitian-American newspaper regarding Beatrice’s retirement. It is during this time that Alina learns Beatrice was cruelly tortured by the Haitian military for refusing a date with one of the officers. Aline comes to consider that human interest pieces like this would be better than dispassionate articles about things like retirement. A young woman named Freda has come to America after refusing to sing at the national palace, for the government killed her father. Freda, now in New York, vows she will return to Haiti, join the rebels, and fight the government.

As the novel comes to an close, events come full-circle. The reader is transported back in time a few decades to the time of the Haitian dictatorship. There, Ka’s father actively works for the military. He is power-hungry and self-obsessed. He delights in developing ways to torture and kill prisoners, and is given the assignment of arresting a preacher who has been verbally defying the government. When the arrest is handled sloppily, the preacher is not killed. The superior officers become angry. Ka’s father is ordered to release the preacher, telling him to stop his defiance. Instead, the preacher stabs Ka’s father in the face, prompting Ka’s father to shoot the preacher multiple times, killing him. Ka’s father then runs out into the night, horrified at what has happened, where he runs into the woman who will become his wife, Anne. Anne tends to his wounds. The killing of the preacher has been too much for him, and he finds acceptance and redemption in his marriage to Anne. Years later, he will tell Ka that she and Anne have been masks to his face. Ironically, the preacher was Anne’s stepbrother.