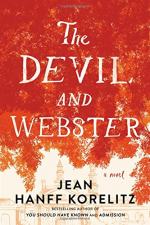 Related Topics
You Should Have Known
The Plot

Jean Hanff Korelitz
This Study Guide consists of approximately 63 pages of chapter summaries, quotes, character analysis, themes, and more - everything you need to sharpen your knowledge of The Devil and Webster.

The Devil and Webster Summary & Study Guide includes comprehensive information and analysis to help you understand the book. This study guide contains the following sections:

This detailed literature summary also contains Quotes and a Free Quiz on The Devil and Webster by Jean Hanff Korelitz.

The following version of the book was used to create this study guide: Korelitz, Jean Hanff. The Devil and Webster. Grand Central Publishing, 2017.

The Devil and Webster begins with a description of Naomi Roth’s handling of an incident involving a trans man living in the unofficial “women’s” dormitory at Webster College, ten years before the main action of the novel. Naomi’s ability to more or less successfully resolve the conflict directly leads to her appointment as Webster’s president. Returning to the present of the novel, Hannah, Naomi’s daughter and a student at Webster, informs her mother about a student protest, which reminds Naomi of her own student activist past at Cornell University, as well as the history of student activism at Webster. Naomi then meets Francine Rigor, the dean of admissions at Webster and Naomi’s best friend, for dinner with a man of old, New England money, who donated expensive land to the Hawthorne Academy, where Sumner, Francine’s husband, is headmaster, and whose daughter is interested in attending Webster. Part I of The Devil and Webster concludes by introducing the reader to Naomi’s academic research in non-intersectional, second-wave feminism, Webster College’s long history of conservatism, which only changed to capitulate to liberal voices in the 1970s, and the problem of Nicholas Gall: a very popular professor of anthropology who was turned down for tenure due to a lack of publications and plagiarism in what he did publish. Gall’s denial of tenure, Naomi learns, is the reason students are protesting by camping out in the center of Webster’s campus.

As time passes, the protest grows and Naomi tries, unsuccessfully, to engage in discussion with the student protesters. Naomi frets over the frequency of plagiarism in academia, but also happily remembers how Oksen Sarafian, a past president of Webster, single-handedly initiated Webster’s progression from conservatism to liberalism. Naomi picks up the admissions applications of many of the student activist leaders, with particular interest in Omar Khayal, who’s past seems to be general knowledge of every student on Webster’s campus. Naomi reads Omar’s application, which hints at a childhood in war-torn Palestine, a loss of family, and a grateful redemption from the influence of terrorist organizations. While the protest disbands over Webster’s winter break, Naomi attends the Rigor’s New Year’s Eve party and learns of some vaguely defined drama happening between the Hawthorne School’s board of trustees and Sumner.

When the students return from their break, Naomi is called to address vandalism in the Sojourner Truth House on campus: someone had used human excrement to write racial slurs on the walls of the basement. While processing what this crime means for Webster College in the age of instant communication via the internet, Naomi quietly sits with a crowd of students to hear Omar speak about his past, and his incorrect, Naomi notes, interpretations of what happened to Nicholas Gall and the administration’s reaction to the student protest. Soon, the leaders of the Webster Dissent, as the protest becomes known, are being interviewed on national news programs. In the midst of this, Naomi attempts to schedule a gathering for the Native American alumnae of Webster with Robbins Petavit.

Naomi soon learns that Omar is failing all of his classes and notifies him that he will be placed on academic leave if they do not meet to discuss his academic standing; the student activists learn of this and inform the media of their outrage. The Webster board of trustees then meets to discuss what to do about the Webster Dissent. Because Webster is legally barred from discussing tenure decisions and the transcripts of individual students, the board is at a loss as to how to curb the media’s negative coverage.

Soon after the board meeting, Naomi learns that someone has leaked Gall’s status as a plagiarist to the media. The student activists, including Hannah, take this as an attempt by Webster’s administration to slander Gall. Naomi communicates her stress to Francine, who makes Naomi realize that she is now the face of authority that she used to fight in her own student activist days. Francine also tells Naomi about the attempts of Hawthorne School board of trustees to oust Sumner from his position there. Soon after, Naomi’s office is firebombed in the middle of the night and Omar and Hannah are nowhere to be found. After the bomb, the student encampment on campus disbands, just in time for the Native American Gathering, which is somewhat successful, except for the general feeling amongst alumnae and current students alike that Webster is only superficially liberal while, in actuality, being the exclusive and homogenous environment it always was. After the gathering, Robbins Petavit arrives at Naomi’s home to comfort her, and they become physically intimate. In the middle of the night, Naomi is called to identify the body of a Webster student, who, she confirms, is Omar. Naomi soon learns, though, that Omar was the fake identity of Eduardo Sombra, and that “Omar” and his story were entirely fabricated; this leaves the student activists, and the Webster administration, utterly bewildered. After Naomi and Francine deal with the media coverage of Omar’s false identity, Hannah returns home from Stanford University, where she had quietly transferred the semester before. As The Devil and Webster concludes, Naomi learns that Francine had admitted into Webster the daughter of a donor to Hawthorne Academy so that Sumner could keep his job; Naomi is shocked at this corruption and summarily dismisses Francine from her job and their friendship.

More summaries and resources for teaching or studying The Devil and Webster.

The Devil and Webster from BookRags. (c)2021 BookRags, Inc. All rights reserved.