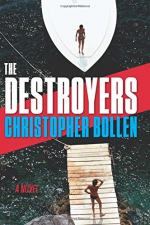 Christopher Bollen
This Study Guide consists of approximately 43 pages of chapter summaries, quotes, character analysis, themes, and more - everything you need to sharpen your knowledge of The Destroyers.

The Destroyers: A Novel Summary & Study Guide includes comprehensive information and analysis to help you understand the book. This study guide contains the following sections:

This detailed literature summary also contains Quotes and a Free Quiz on The Destroyers: A Novel by Christopher Bollen.

The following version of this book was used to create the guide: Bollen, Christopher. The Destroyers: A Novel. Harper Collins, 2017.

The Destroyers opens up with two American women, Raina and Elise, vacationing on Patmos Island, Greece. Elise is trying to escape her recent divorce, but her vacation has been tainted by Raina’s obsession with a local yacht owner, Charlie. Elise sends a postcard off to her sister in America and tries to yank her friend away from a cafe in time to board their ferry. However, a bomb explodes at 11 a.m., killing the women and a group of French tourists.

The narrative then switches to Ian Bledsoe, the recently disinherited and publicly disgraced son of a millionaire baby food company president. The scandal occurred while Ian was working for the company in Panama. After meeting a local woman named Marisela who showed him how factory workers lived and the conditions they were subjected to on the job, Ian tried to help the locals by winning his father’s favor. However, the Panamanian people are taken care of more by the local gangs than by their employers. When one of Ian’s new friends briefly mentioned the idea of setting off a bomb at the factory, the news spread quickly along with the misinformation that Ian played a part in a bomb plot.

Ian flies to Greece after practically begging his oldest, richest friend, Charlie, for help. He recalls a game the two made up called Destroyers in which they have to escape men in black balaclavas. Charlie agrees to have Ian come over without hesitation, and Ian prepares a speech in which he proposes a job for himself with Charlie’s father’s company. Instead, Charlie offers to hire Ian on as the number two at his yacht company in where those with no boating qualifications can rent his boats. Before Ian can learn what the job entails, Charlie declares that he has a meeting in Bodrum and that since his girlfriend, Sonny, has been on edge since the bomb, she cannot know that he has left Patmos.

Ian tours the island or spends his days at the beach with Charlie’s family, Sonny, and his ex-college girlfriend, Louise. He and Louise begin a physical relationship, but when Ian asks her if they could potentially be more, she constantly shuts him down.

Ian does his best to cover for Charlie, including lying to Sonny, putting a chess piece in her purse that she will believe is from Charlie, and telling Inspector Martis at the police station that he saw Charlie the morning after his emotional episode in Skala in which Miles gave him a black eye. The argument was planned so that Charlie could make his way more easily to Bodrum the following morning. However, Ian becomes more entangled in lie after lie as he tries to cover for Charlie but is constantly pestered with questions of his whereabouts by everyone he comes in contact with. Ian realizes that something is wrong when he learns that Charlie did not make his meeting in Bodrum, he has not been seen in days, and he will not answer any texts.

Winding his way through a spider web of deception, Ian pieces the puzzle of Charlie’s disappearance together by working his way through interesting figures including an inspector, a frantic young American, a hippie camp leader who prays for the Apocalypse, a gambler, and a priest with a taste for the lavish. Through kidnappings and interrogations, Ian realizes that Charlie’s yacht business is not as innocent as originally thought and that his friend, also risking losing his inheritance, has committed crimes greater than Ian’s imagination.

More summaries and resources for teaching or studying The Destroyers: A Novel.

The Destroyers: A Novel from BookRags. (c)2022 BookRags, Inc. All rights reserved.