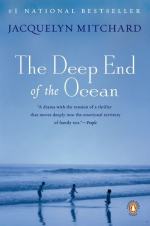 The Deep End of the Ocean Summary & Study Guide

Jacquelyn Mitchard
This Study Guide consists of approximately 53 pages of chapter summaries, quotes, character analysis, themes, and more - everything you need to sharpen your knowledge of The Deep End of the Ocean.

The Deep End of the Ocean Summary & Study Guide Description

The Deep End of the Ocean Summary & Study Guide includes comprehensive information and analysis to help you understand the book. This study guide contains the following sections:

This detailed literature summary also contains Topics for Discussion and a Free Quiz on The Deep End of the Ocean by Jacquelyn Mitchard.

This novel by Jacquelyn Mitchard is a wonderfully-told story about a family that endures the worst imaginable crisis—losing a young child. However bleak the outlook may be in such a bad situation, the state of mind of little "Ben's" mother may be even bleaker. A woman who loves her children but is somewhat inattentive, she is thrown into a state of shock and struck dumb by her guilt and devastation when her toddler disappears in the lobby of a hotel.

The woman, Beth Kerry, is an emotionally-reserved woman of Irish descent. She is married to Pat Cappadora, who comes from a tight-knit, loving Italian family. Pat's family is as grief stricken as little Ben's parents and, while Pat is able to express his grief and accept support, Beth's guilt and sorrow-induced anxiety forces her to withdraw even more than usual, and for a very long time. She becomes lost in a vacuum of emotional pain and is no longer involved in family or the rest of the world, but is bitter and angry, barely noticing her growing children.

Little Ben, whose older brother Vincent feels responsible for his loss, also has a baby sister, Kerry. Vincent is particularly damaged from this incident due to his mother's tendency to withhold her love out of a twisted loyalty to his missing brother. Also, his fear that it was his fault and the possibility later that he is recognizing his brother in the neighborhood, contributes to Vincent's confusion and pain. Vincent is extremely intelligent and is a math wizard, but all of his energies tend toward high-risk behaviors due to his inner turmoil.

When a neighbor boy comes to the door looking for work mowing lawns, Beth recognizes him as Ben. What should be a joyous time turns difficult when the Cappadoras realize that Ben has had a different life and does not really know them, nor does he want to live with them. He is close to the man who raised him, and goes back to what he perceives as home. Vincent blames himself for Ben's decision to go and comes dangerously close to self-destruction. Ben admits that he remembers a moment from his early childhood with Vincent that makes him realize he really was part of the Cappadora family.

However, without Ben, the Cappadora family finally begins to fall apart and Beth considers leaving home. Before she does, Ben returns to the Cappadora household late one night with his suitcase. He and Vincent bond as they play basketball. Vincent tells Ben it was his fault Ben got taken when he was three. The two finally go to bed, and Vincent knows that the morning will bring whatever it will, but he will keep watch.

More summaries and resources for teaching or studying The Deep End of the Ocean.

The Deep End of the Ocean from BookRags. (c)2022 BookRags, Inc. All rights reserved.