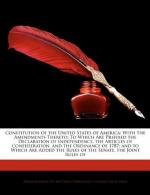 Introduction & Overview of The Declaration of Independence

Thomas Jefferson
This Study Guide consists of approximately 26 pages of chapter summaries, quotes, character analysis, themes, and more - everything you need to sharpen your knowledge of The Declaration of Independence.

The Declaration of Independence Summary & Study Guide includes comprehensive information and analysis to help you understand the book. This study guide contains the following sections:

This detailed literature summary also contains Bibliography on The Declaration of Independence by Thomas Jefferson.

Perhaps the greatest of the great documents of American culture is the Declaration of Independence, which was adopted on July 4, 1776. It is a comparatively brief essay because it was intended to summarize the grievances of the American colonists against the British Crown, thus providing justification for the American separation from England. Foremost among the Declaration's associations with the American dream is its firm statement about the "inalienable rights" of all people, including "life, liberty, and the pursuit of happiness." Over time this phrase has become a simple summary of what this country stands for and a statement of the basic principles of American democracy. It is these words, more than any others, that have drawn immigrants from all over the globe and served to instill in all citizens the fundamental concept of what the United States stands for. It is in the pursuit of these principles that Americans have fought and died in wars, organized and advocated for civil rights, and pursued political office.

To fully appreciate the Declaration of Independence, it is necessary to understand the background of its composition. England established colonies in North America in the early seventeenth century; for more than 150 years, the inhabitants of these colonies, for the most part, were quite content to remain tethered to the "Mother Country." They considered themselves Englishmen and entitled to the same rights as their brethren thousands of miles across the Atlantic Ocean, an idea shared by the vast majority of British inhabitants. However, the colonists gradually developed an interest in self-sufficiency; they wanted to control their own economic and political affairs, which for the most part were firmly dominated by the government in England.

Nevertheless, there was no widespread, organized agitation for independence until after the French and Indian War, the American name for what Europeans termed the Seven Years' War. Much of the fighting took place in North America, and American militia supplemented the British army and its Indian allies against the French, who also fought alongside certain native tribes. The war ended in 1763 and resulted in the almost complete removal of French authority in North America; from that point on, the British were unquestionably the dominant Europeans on the continent. However, the British government decided that the colonies were not paying their share of the war's cost, and various taxation plans were introduced to rectify the situation. The colonists were enraged, particularly as they had no direct representation in the British Parliament. Eventually the political arguments turned violent, and by 1775 the American colonies were in open revolt against the Crown.

In spite of the fighting that had broken out, many colonists still held out hope for a peaceful resolution to the conflict. By the summer of 1776, however, leaders of the Patriot movement were convinced only independence from Great Britain would be satisfactory. The Continental Congress realized that a formal declaration of independence stating the reasons for severing ties with England was necessary. While a number of Patriot leaders collaborated in drafting the ideas of the Declaration, it fell to Virginia representative Thomas Jefferson, a gifted author, to compose the final draft so familiar to Americans today.

It is not surprising that Americans who remained loyal to the Crown did not embrace the Declaration of Independence, and a careful analysis of the document reveals certain argumentative weaknesses. For example, while Jefferson enumerates the causes of the need for the declaration, he does not provide specific instances of Royal interference with colonial rights. There is no effort to name which British soldiers are accused of harming colonists, nor are the accusations of the revocation of colonial charters—legal recognition of their existence—supported by any evidence or proof. This lack of evidence is a curious omission in a document prepared by a lawyer. Of course, Jefferson did not intend for his declaration to be a formal legal document; he intended for it to serve as a brief explanation of the reasons the colonies intended to leave the British Empire. Excessive legal jargon or detailed evidence, therefore, would have made the document much longer and less likely to make an impression on the average reader.

More troubling, perhaps, to modern readers is the fact that many of the rights defined in the declaration have not always been fully protected by the federal government. The phrase "all men are created equal" is somewhat sexist; the word "people" would be more inclusive of women. Yet women could not vote, seek political office, or hold most jobs in the eighteenth century—an imbalance of equality not corrected until well into the twentieth century. The Declaration appeared at a time when many Americans, including the document's author, owned slaves. Even when African Americans were free, their rights were generally ignored. For that matter, only men who owned property were allowed to vote or run for office in most parts of the infant nation, pointing to either the literalness or hypocrisy of Jefferson's famous phrase.

The phrase "Life, Liberty, and the pursuit of Happiness" has also been restricted in many ways over the years. For example, if all people are guaranteed "Life," why does this country still allow capital punishment? If everybody is at liberty and free to do whatever he or she sees fit, why were interracial marriages illegal in some states until the 1960s? Why is same-sex marriage illegal in most states today? The answer, of course, is that notions of individual liberty were very different in 1776 compared to modern times. Yet it is important to remember that these principles of liberty have gradually expanded in the wake of the Declaration and the publication of the nation's other "Great Documents." Whenever a group of Americans finally achieves its rights—or whenever a new concept is assumed to be a "right" of every American—freedom and democracy are promoted and expanded. Although it can be a long and painful process, the expansion of freedom in democracy within our nation continues as we attempt to perfect the ideals of Thomas Jefferson's Declaration of Independence.

More summaries and resources for teaching or studying The Declaration of Independence.

The Declaration of Independence from BookRags. (c)2021 BookRags, Inc. All rights reserved.