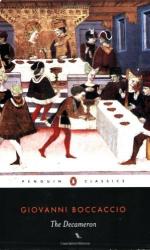 The Decameron Topics for Discussion

Giovanni Boccaccio
This Study Guide consists of approximately 35 pages of chapter summaries, quotes, character analysis, themes, and more - everything you need to sharpen your knowledge of The Decameron.

What might have happened if the people discovered Ciappelletto's wickedness after he had been canonized?

Do you think Gianotto's faith changed after Abraham's conversion? Explain.

What actions might have the Sultan taken if he had known the truth about Alatiel's misadventures? Would she have been sent to the King of Algarve?

Do you think the two grave robbers went back to the archbishop's tomb to search for the ruby ring? Why?

What punishment might the monk have received if the abbot decided to deny his own charges of lechery?

Melchisedech was shrewd about answering Saladin's question regarding the true religion. Of the three laws, which might Saladin have practiced?

Do you think Frederigo and Monna Giovanni would have ever come together under different circumstances? What if Monna's son had lived? Explain.

Would Lizio have felt the same about Caterina's marriage if Ricciardo was a...

More summaries and resources for teaching or studying The Decameron.

The Decameron from BookRags. (c)2021 BookRags, Inc. All rights reserved.