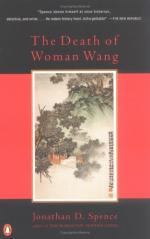 Plot Summary
+Chapters Summary and Analysis
Chapter 1, the Observers
Chapter 2, The Land
The Widow
The Feud
The Woman Who Ran Away
The Trial
Free Quiz
Characters
Objects/Places
Themes
Style
Quotes
Topics for Discussion
Order our The Death of Woman Wang Study Guide

Jonathan Spence
This Study Guide consists of approximately 26 pages of chapter summaries, quotes, character analysis, themes, and more - everything you need to sharpen your knowledge of The Death of Woman Wang.

The Death of Woman Wang Summary & Study Guide includes comprehensive information and analysis to help you understand the book. This study guide contains the following sections:

This detailed literature summary also contains Topics for Discussion and a Free Quiz on The Death of Woman Wang by Jonathan Spence.

"The Death of Woman Wang," by Jonathan D. Spence gives the reader an in-depth idea of life in a small county in Northern China, in the 1670s. The book is a historical reconstruction of T'an-ch'eng County, in Shantung Province. This is an area on the tributaries of the Yellow River, that is inland but not far from the sea. According to the preface, the author is led to study T'an-ch'eng County after finding out about the story of woman Wang, but this particular story only takes up a little more than twenty pages of the book. The author uses three main primary sources, amid many other secondary sources. One of these primary sources is the "Local History of T'an-ch'eng, by the Chinese scholar, Feng K'o-ts'an, who writes it in 1673, and has a large amount of information on the area. Feng, who writes this history, is described in the first chapter, "The Observers" and concentrates his work on the recurrent famines, banditry, and even an earthquake that devastates T'an-ch'eng County. Feng in his history work is blunt about the collapse of the population and cultivated land area in the fifty years before the work is written in 1673.

The second group of primary sources used by the author is the Memoirs and Handbook of Huang Liu-hung who is a magistrate, or judge, in the county, during the 1670s. Huang is also at times a character in the book and plays a significant role as a judge in the trial concerning the murder of woman Wang. The third primary source used is stories by the fictional writer P'u Sung-ling, who lives in an area outside but very close to T'an-ch'eng. P'u Sung-ling's stories occupy a substantial part of the book and give it a more lively and storybook quality. Sometimes the book reads like a collection of fictional stories, though its purpose is to be a historical reconstruction, and the book has extensive notes in the back of the book, and a bibliography.

The elements of T'an-ch'eng County life are described after initial general information. One issue is that of the land, its ability to feed people and the ability of people living on the land to pay taxes. There are also the special problems of the lives of widows, and their struggles to obtain income and raise children, especially sons. After extensive general observations about banditry in the county, the fourth chapter describes in fiction and from historical record, the crimes of a group of bandits and the struggle of honest people to stop their murders and thievery. Finally, in Chapter 5, through primary sources and stories, the rights of women in general are examined, which leads to the sad case of the death of woman Wang.

More summaries and resources for teaching or studying The Death of Woman Wang.

The Death of Woman Wang from BookRags. (c)2022 BookRags, Inc. All rights reserved.