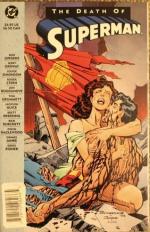 The Death of Superman is the story of Superman facing his greatest enemy ever. The beast will be unrelenting and single minded. The only hope that Superman has is to give everything he has in order to stop the monster and save those he loves. Superman will have to fight for not only his life, but everyone's lives when Doomsday arrives.

The scene opens with a gloved hand hitting a steel door repeatedly. Each time that the glove hits a little piece of it is torn away. As the the hand breaks through the door the caption reads "Doomsday is here!" As the creature erupts from underground the earth shakes and the wildlife begins to flee from the place where the creature is.

Meanwhile in Metropolis a young boy named Keith is buying spray paint that glows in the dark. Keith is scared...