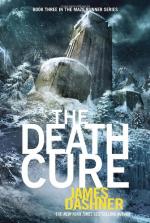 James Dashner
This Study Guide consists of approximately 33 pages of chapter summaries, quotes, character analysis, themes, and more - everything you need to sharpen your knowledge of The Death Cure.

This detailed literature summary also contains Topics for Discussion on The Death Cure by James Dashner.

The Death Cure is the third novel in the maze runner trilogy by James Dashner. In this book, Thomas, a teenage boy, is one of the subjects in an experiment conducted by a government agency known as WICKED. When a manmade disease, known as the Flare, is introduced to the human population, WICKED starts running experiments to find a cure. The Flare causes humans to go insane and to become cannibals.

Thomas and several of his friends have been an ongoing part of these experiments. The novel describes the final experiment that determines which of the subjects are immune to the Flare and which of the subjects are already ill with the disease. It turns out that Thomas is one of the immune, one of the Munies. When WICKED offers to remove a swipe implant from the subjects' brains to return all of their memories to them, Thomas and a few of his friends opt out of the procedure and plan an escape from WICKED.

WICKED continues to hunt Thomas and his friends down because Thomas holds the key to their final experiment. After traveling to Denver, Thomas and his group meet members of the Right Arm, a group organized to bring down WICKED. Armed with a plan to bring WICKED down, Thomas returns to WICKED with the Right Arm planning to save him. In the end, Thomas and the others are able to shut WICKED down forever.

More summaries and resources for teaching or studying The Death Cure.