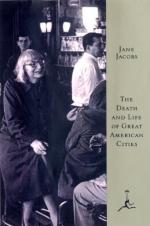 Jane Jacobs
This Study Guide consists of approximately 34 pages of chapter summaries, quotes, character analysis, themes, and more - everything you need to sharpen your knowledge of The Death and Life of Great American Cities.

The Death and Life of Great American Cities Summary & Study Guide includes comprehensive information and analysis to help you understand the book. This study guide contains the following sections:

This detailed literature summary also contains Topics for Discussion on The Death and Life of Great American Cities by Jane Jacobs.

The Death and Life of Great American Cities by Jane Jacobs is concerned with the problems of city planning and the strategy that planners followed throughout most of the twentieth century. The strategy of rebuilding has not been successful. It has not accomplished anything in eliminating slums or halting the decay of city neighborhoods. Jacobs blames not only the city planners but places the burden of the blame on the theorists and educators.

Jacobs provides a good analysis of what contributes to the success of neighborhoods by looking at city streets and sidewalks, parks and neighborhoods. She deduces the factors that result in vital neighborhoods. These neighborhoods have streets, sidewalks and parks that are safe, that provide for contact between people, and that provide the opportunity for children to be watched and taught. Jacobs looks at what factors have a positive contribution to each of these areas and what detracts from each. The differences in ages and shapes of buildings in a neighborhood mean something in terms of not only visual presentation but also of functionality and cost of rent. The variety of small commercial establishments creates uses for people. These establishments are the reason that people come to the area, whether the establishments are bars, restaurants, or art galleries. Because of these different establishments, people are in the area at different times of the day.

Jacobs also analyzes the economic interrelationships that exist in successful neighborhoods. One of the reasons for the need for buildings of different ages has to do with rents. New buildings have high costs of construction to cover and therefore have to charge higher rents than older building. A neighborhood with a mixture of older and newer buildings tends to have more mom and pop type stores, required for diversity and watchful neighborhood eyes.

The reasons for the decay and regeneration of certain city neighborhoods are also examined. The factors that contribute to decay and the creation of a slum are in place and are operative years before the area is officially declared a slum. There are steps that can be taken to prevent decay, but taking these steps are not what city planners are doing. There are also steps that can be taken that can reverse the process of decay. Again, this is not what city planning has been involved in. Since rebuilding slums is essentially a form of slum shifting, this is not the solution to end decay of neighborhoods or the solution to eradicate slums. Regeneration requires people who want to stay in the area. Jacobs feels that the proper role for a city planner is to analyze neighborhoods and see what it is that makes them successful or unsuccessful. The planners then should encourage the factors that promote success and discourage the factors that contribute to lack of success. The current planning mechanism does not have the apparatus or structure to do this. Planning should not mean tearing down and rebuilding.

More summaries and resources for teaching or studying The Death and Life of Great American Cities.

The Death and Life of Great American Cities from BookRags. (c)2021 BookRags, Inc. All rights reserved.