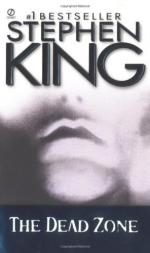 Stephen King
This Study Guide consists of approximately 33 pages of chapter summaries, quotes, character analysis, themes, and more - everything you need to sharpen your knowledge of The Dead Zone.

This detailed literature summary also contains Topics for Discussion and a Free Quiz on The Dead Zone by Stephen King.

"The Dead Zone" by Stephen King is the story of Johnny Smith. Johnny starts out as a happy child who enjoys playing in the wintry outdoors in Maine. At six years old, Johnny's only concern as well as his only dream is to learn how to ice skate backwards. Many of the neighborhood children are playing on the local pond, skating and playing hockey. The kids are separated by age. The older kids play hockey on one side of the pond and skaters stay to the other side. There is an accident and Johnny is knocked to the ground, hitting his head so hard that he blacks out. After a few minutes, Johnny seems to be relatively okay except for a knot on his head. The only peculiar thing is that Johnny tells one of the chaperons "not to jump it no more" and something about a battery and an explosion. Everyone thinks the comment is confusion from the bump on the head. A few days later, the neighbor jumps his old truck once again and there is an explosion, shooting battery acid into the man's face. No one recalls Johnny's prediction.

After college, Johnny takes a teaching job at a local high school where he meets Sarah Bracknell. Johnny and Sarah begin to date and fall in love. On Halloween, Johnny and Sarah go to a local carnival. The date is almost ruined when Johnny tries to scare Sarah with a scary mask. At the carnival, Johnny tries his hand at the Wheel of Fortune. Johnny cannot lose and wins over 500 dollars. While Johnny plays the game, Sarah notices something strange about him and is scared.

Sarah eats a bad hot dog and becomes violently ill. The bad food causes the pair to cancel their first night together. Sarah convinces Johnny that she will be fine and so Johnny hails a cab and heads back to his apartment. Along the way, there is a terrible accident. The cab driver dies and Johnny goes into a coma that lasts four and a half years.

While Johnny is in the coma, his mother becomes a religious fanatic and Sarah moves on with her life, marrying and having a child.

Much to everyone's amazement, Johnny comes out of the coma. Almost immediately, it is apparent that Johnny has received some sort of psychic gift - or curse - depending on who is being asked. The first real incidents take place in the hospital, first with Dr. Weizak and then one of the nurses. The story gets out when Johnny "reads" a reporter. Johnny has become a circus sideshow.

Over the next couple of years, Johnny tries to deal with the after effects of the near-fatal accident. The psychic is forced to leave his home town and takes a job in New Hampshire where he tutors a teenage boy. Along the way, there are more predictions. The biggest case arrives in the form of Greg Stillson, a politician with a murderous past. Stillson is almost messianic in his appeal to the people, but Johnny knows the truth and sees a future in which Stillson will be responsible for nuclear war and genocide. Johnny must kill Stillson.

In the end, Johnny learns that he has a brain tumor and refuses treatment. The only things left to do are to write letters to his father, Sarah and Dr. Weizak. Johnny plans the assassination and although he fails to kill Stillson, the politician's career is ruined and the world saved.