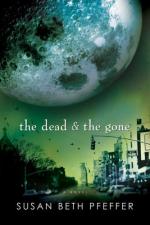 The Dead and the Gone Setting & Symbolism

Susan Beth Pfeffer
This Study Guide consists of approximately 54 pages of chapter summaries, quotes, character analysis, themes, and more - everything you need to sharpen your knowledge of The Dead and the Gone.

New York is where "Dead and the Gone" is based and where Alex Morales and his family are living when the moon is hit by an asteroid.

St. Margaret's is the church that the Morales attend.

St. John of God Hospital is the hospital where Alex's mother works. She is on her way to work when she is presumably killed by flooding in the subway.

Milagro del Mar, Puerto Rico is the village to which Alex's father traveled for his mother's funeral, immediately prior to the catastrophe.

Holy Angels is the religious school that Briana and Julie Morales attend.

Notburga Farms is the farm where Alex sends Briana to work and...

More summaries and resources for teaching or studying The Dead and the Gone.

The Dead and the Gone from BookRags. (c)2022 BookRags, Inc. All rights reserved.