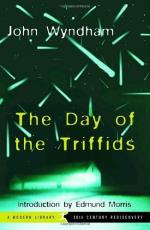 The Day of the Triffids Summary & Study Guide

John Wyndham
This Study Guide consists of approximately 39 pages of chapter summaries, quotes, character analysis, themes, and more - everything you need to sharpen your knowledge of The Day of the Triffids.

The Day of the Triffids Summary & Study Guide Description

The Day of the Triffids Summary & Study Guide includes comprehensive information and analysis to help you understand the book. This study guide contains the following sections:

This detailed literature summary also contains Topics for Discussion and a Free Quiz on The Day of the Triffids by John Wyndham.

This novel of speculative fiction, written in the early-1950s, tells a story common to the genre of that era: traditional western ways and philosophies of life are decimated, and threatened with complete destruction, by a combination of mysterious events and the increasing control of a disguised, subversive, murderous entity; in this case, mobile and intelligent plants. As it chronicles the struggles of a small, desperate group of human survivors, the narrative explores themes relating to the conflict between morality and necessity, the nature of human frailty, and the social nature of being human.

The novel begins with the narrator's experience of waking up in hospital and knowing immediately that the environment, both in the hospital and in the larger environment of the world outside the hospital windows, is not what it should be. He describes the events of the day before—how large numbers of people, apparently all over the world, were held spellbound by the sight of bright green lights in the sky, apparently the result of the earth passing through the tail of a comet. He works up the nerve to remove the bandages covering his eyes (the result of recent treatment to help him recover from an attack by a triffid, a strange ambulatory plant), and then discovers that almost everyone else in the hospital, and indeed in the outside world, has been stricken blind.

After a chapter in which he narrates a few details of his own life and a greater number of details about how triffids came to be accepted in society, the narrator (giving his name as William Masen) describes his journey out of the hospital and into the center of London. There, he is repeatedly confronted by harrowing experiences of how almost the entire city is coping, or not, with sudden blindness. During one such experience, he rescues a sighted girl from being held hostage by a violent blind man. He learns her name is Josella, and after a few violent encounters with triffids, they take refuge in a luxurious apartment. There they each in their own way bid farewell to the past society they know is coming to an end and prepare to face a violent, dangerous future.

The next day, William and Josella make contact with a small group of sighted survivors planning to leave London and establish a new community in the more secure, healthier countryside. These plans are interrupted by a raid on the community by a sighted man named Coker, who is convinced that the sighted few have a moral responsibility to help the non-sighted majority. William escapes Coker's enforced leadership of a group of the blinded and attempts to find Josella, who had disappeared during the raid. His search through London and across the countryside results at first in failure and in a second encounter with Coker, who has realized the folly of his actions and is seeking to join a fully sighted community.

William's search for Josella eventually leads him to discover that she has established herself at the head of a small sightless community. She and William join forces to strengthen the community's resources and defenses, and they live a relatively successful life for a few years in spite of the growing threat presented by increasing numbers of increasingly predatory triffids. One day the community is visited by Ivan, a member of the initial group of sighted survivors encountered by William and Josella in London. He tells them the initial community has found itself a relatively secure location, and is eager for them to join up - William, a biologist, is needed to develop a way of permanently eliminating triffids. After agreeing to join the larger community, however, William and the others receive a visit from the domineering representative of a rival military community, who essentially orders them to join up. William and the others make their escape, a brief epilogue revealing they successfully joined the first community and are working towards the time when the world will be free of triffids and humanity can again live with full freedom in its own world.

More summaries and resources for teaching or studying The Day of the Triffids.

The Day of the Triffids from BookRags. (c)2022 BookRags, Inc. All rights reserved.