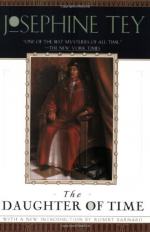 Josephine Tey
This Study Guide consists of approximately 38 pages of chapter summaries, quotes, character analysis, themes, and more - everything you need to sharpen your knowledge of The Daughter of Time.

The Daughter of Time Summary & Study Guide includes comprehensive information and analysis to help you understand the book. This study guide contains the following sections:

This detailed literature summary also contains Topics for Discussion and a Free Quiz on The Daughter of Time by Josephine Tey.

Josephine Tey's Daughter of Time is a good, old fashioned detective story with a twist. Alan Grant, an inspector for England's famous Scotland Yard, finds himself confined to a hospital bed after taking an unfortunate fall in the line of duty. Grant's mishap involved plunging through a trap door and leaves him incapacitated, not to mention extremely bored as he recovers from his considerable injuries. Having rejected several books supplied to him by his actress friend, Marta Hallard, Grant spends numerous hours studying the ceiling, and becoming thoroughly familiar with the comings, goings and idiosyncrasies of his appointed nurses. Grant is eager for a mental challenge. Marta suggests he try solving an age-old mystery no one has ever been able to solve. She brings him a collection of pictures, portraits of faces from history, and Grant begins his journey to resolve a real crime while he recuperates.

Grant prides himself on his intuitive ability to analyze a face. He comes across a portrait of Richard III, accused of being responsible for the murder of his two young nephews, the sons of his brother, Edward IV. It occurs to Alan Grant, based on his interpretation of Richard's face, that perhaps Richard was not really the perpetrator of such a heinous crime. Grant proceeds to undertake a focused study of British history, putting together clues from facts, discarding regurgitated rumors, and eventually drawing a more logical conclusion about Richard III.

Richard III's reputation as the original wicked uncle has been perpetuated for eons by school text books, and Grant finds most people actually do believe some version of Richard's involvement in the disappearance of the young princes in the tower. With the picture of Richard set up in a visible spot in his room, at least one of Grant's friends sees a great deal of suffering in Richard's face, while his surgeon sees childhood disease. No one, however, senses a strong sense of criminality in Richard's facial expression. In his research of the facts and events during the time of the boys' disappearance, Alan Grant and his friend Brent Carradine uncover some fascinating details that tend to discredit the accusation against Richard III. Although other researchers came to similar conclusions in the 18th and 19th centuries, no one had yet written about it in the 20th century. It seems that not Richard but, perhaps, Henry VII was the evil beast who ordered the young boys to be murdered. With a little help from Richard's enemies and his own friends, Henry manages to make the entire world believe that Richard, who had no motive whatsoever, was the guilty uncle. The effect of Grant's investigation is that his readers may gain the awareness to not simply accept what we are taught. Of course, the benefit to Alan Grant is that this exercise in criminal analysis has happily occupied his busy mind while he recovers from his injuries.

Daughter of Time is a lighthearted, yet serious look at how history can be misconstrued through the more convenient reinterpretation of the person in power, and as such, can become part of our common understanding, not being true knowledge at all, but simply hearsay.

More summaries and resources for teaching or studying The Daughter of Time.

The Daughter of Time from BookRags. (c)2022 BookRags, Inc. All rights reserved.