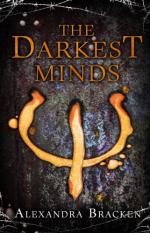 Related Topics
The Darkest Minds: Never Fade
In the Afterlight
Through the Dark
Lore
Lore: A Novel

Alexandra Bracken
This Study Guide consists of approximately 49 pages of chapter summaries, quotes, character analysis, themes, and more - everything you need to sharpen your knowledge of The Darkest Minds.

This detailed literature summary also contains Quotes and a Free Quiz on The Darkest Minds by Alexandra Bracken.

In The Darkest Minds by Alexandra Bracken, Ruby Daly is almost ten years old when children across the United States begin dying at an alarming rate. Many of those who don’t die exhibit an array of strange symptoms. The government creates a police force to deal with them. The youngsters, known as the “Psi” children, soon become a group to be feared. Even parents are sometimes afraid and willingly turn those who appear to be affected over to the Psi soldiers.

Ruby watches as friends fall victim, but she doesn’t show any signs of illness herself until the night before her tenth birthday. Her parents argue that night and Ruby rushes to her room, locking herself inside. Later, she slips downstairs to her parents’ bedroom. She quietly looks at her mother and suddenly discovers she is able to see into her mother’s mind. She doesn’t understand what she’s seeing or how it might affect her mother, but she’s curious about it. She ends the contact rather abruptly and moves to her father’s side of the bed, where she repeats the process. The following morning, Ruby is amazed that her mother isn’t cooking the traditional birthday breakfast. When she asks why, her mother is obviously frightened and doesn’t recognize Ruby. She takes Ruby to the garage and locks her inside. A short time later, Ruby’s father arrives at the garage. He is a police officer and consoles her. However, he doesn’t recognize her. It’s not until later that Ruby realizes she erased her parents’ memories, but only those memories related to Ruby.

Ruby’s father plans to take Ruby to the police station in an effort to find her parents, still not realizing what’s happened and unwilling to believe Ruby when she says she is their daughter. However, the Psi soldiers arrive first and take Ruby into custody along with other children. They are kept awake and treated roughly as a large group is bussed to a holding camp. By the time they arrive, children have been brutalized and terrified. Shortly after exiting the bus, one of the youngsters whispers in the ear of a guard who then shoots herself, acting upon the suggestion of the youngster.

Ruby quickly discovers that children are separated by their abilities. Children designated “blue” are able to manipulate things, remember complex pieces of information, break codes, and sometimes move items. Ruby is “orange.” Along with those of similar skills, Ruby is able to plant ideas into the minds. She realizes that she doesn’t want her captors to know this about her, and she suggests to him that she belongs with the blues. He makes that classification and she successfully hides the truth for six years.

During that time, most of the children with orange or red designations are killed or moved to more secure facilities. Ruby and one other remains in Thurmond until the League of Children – a radical political group – breaks them out. But Ruby knows they also don’t have her best interests at heart and she runs away from them as well. She meets up with a trio – Suzume, Lee, and Chubs – and they are soon devoted to each other.

They eventually find themselves in camp of another orange, Clancy, who is the son of the United States President. But Clancy is like most oranges, selfish and willing to sacrifice anyone in pursuit of his own goals. Ruby, Chubs, and Lee manage to escape when the camp is overrun by Psi soldiers and they continue their travels, eventually finding the father of Jack, another of their friends who was killed during an escape attempt. Jack’s father shoots Chubs, wounding him so seriously that Ruby is certain he will die. Faced with the likelihood that Psi soldiers will be taking them back into custody, Ruby calls on the League. They are rescued but now in the League’s control with little chance of escaping.

Ruby makes a deal with the League to remain with them on the condition that Lee is released. Ruby and Lee are romantically involved by this point and Ruby knows that Lee won’t leave without her. Armed with that knowledge, Ruby makes a decision and pulls all Lee’s memories of their time together from his mind so that he’s free to go on with his life.

More summaries and resources for teaching or studying The Darkest Minds.