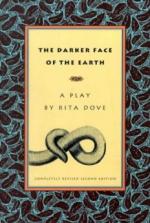 The Darker Face of the Earth: A Play Summary & Study Guide

Rita Dove
This Study Guide consists of approximately 18 pages of chapter summaries, quotes, character analysis, themes, and more - everything you need to sharpen your knowledge of The Darker Face of the Earth.

The Darker Face of the Earth: A Play Summary & Study Guide Description

The Darker Face of the Earth: A Play Summary & Study Guide includes comprehensive information and analysis to help you understand the book. This study guide contains the following sections:

This detailed literature summary also contains Topics for Discussion on The Darker Face of the Earth: A Play by Rita Dove.

The Darker Face of the Earth is a play by Rita Dove, which consists of an American antebellum retelling of the Greek tragedy Oedipus.

The play begins with the birth of a baby to Amalia, the nineteen year-old wife of plantation owner Louis giving birth to a baby boy. But Louis is not the father of the baby - it is Hector, a slave. Louis is enraged, but the attending physician encourages Louis not to kill the child. Instead, the doctor takes the baby away with him to Charleston to be raised by another family, and sold when ready. The doctor spreads the rumor among the slaves that the baby has died instead of letting them know the baby has actually survived.

The loss of her baby sends Amalia into a twenty year period of cruelty and intolerance toward her slaves. She hires a harsh overseer whom she goads into being even harsher towards the slaves. Hector, meanwhile, has gone to live in the swamps alone, where he hunts down and kills snakes. Amalia later buys a new slave to work on the plantation named Augustus. Augustus was bought by a British sea captain, who then promised Augustus freedom upon death. But the captain's brother sells Augustus instead in order to pay off debts. Augustus then becomes a wild and uncontrollable slave. Upon arrival at the plantation, the other slaves see that Augustus is rebellious and educated. They admire his hatred of whites and his intelligence. He becomes a natural leader among them.

Augustus soon becomes involved in an insurrection plot, while at the same time beginning a sordid sexual affair with Amalia. Augustus begins turning the slaves, one by one, to the rebellion. When Augustus's plotting is overheard by Hector, Augustus must kill Hector in order to silence him. In so doing, he kills his own father. Word travels to the other conspirators that Augustus has some sort of relationship with Amalia, and the other slaves demand he kill both her and Louis. He must do this in order to prove he is still loyal to the rebellion.

The night of the insurrection, Augustus confronts Louis, who tells Augustus to speak to Amalia about his mother. Augustus then stabs Louis and confronts Amalia. He discovers to his horror that Amalia is his own mother, and Amalia stabs herself. The play ends with the slaves breaking into the house and discovering the dead Amalia and Louis. In triumphal celebration, they raise up a stunned and shocked Augustus in victory. The plantation house is then burned as the slaves leave.

More summaries and resources for teaching or studying The Darker Face of the Earth: A Play.

The Darker Face of the Earth: A Play from BookRags. (c)2022 BookRags, Inc. All rights reserved.