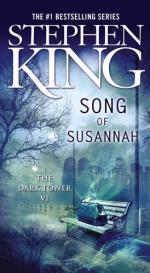 The Catholic priest Donald Frank "Pere" Callahan originally appears in an earlier Stephen King novel that is not part of the "Dark Tower" series. In 'Salem's Lot (1976), Callahan helps battle vampires in Jerusalem's Lot, a small town in Maine. In the "Dark Tower" series, he enters Mid-World, sets up a church in the town Calla Bryn Sturgis, wins converts, and fights alongside Roland in the battle against the robot wolves before joining Jake on his trip to New York to help save Susannah.

A twelve-year-old boy when Song of Susannah takes place, Jake Chambers ended up in Mid-World after being thrown in front of a train by the villain Jack Mort in an earlier "Dark Tower" volume. He subsequently becomes an apprentice gunslinger under Roland's tutelage. He is a person with both adult and childlike qualities. He also has the ability to read thoughts...