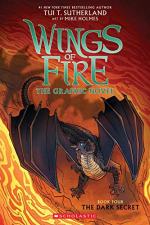 Tui T. Sutherland
This Study Guide consists of approximately 58 pages of chapter summaries, quotes, character analysis, themes, and more - everything you need to sharpen your knowledge of The Dark Secret.

This detailed literature summary also contains Quotes and a Free Quiz on The Dark Secret by Tui T. Sutherland.

The land of Pyrrhia is overwhelmed by a civil war that has been raging for almost 20 years. The land is inhabited by seven distinct tribes of dragons, each with specific strengths and a tendency to live separately from the others. Dragons tend to have no respect or trust for dragons of other tribes, though most have formed alliances in the ongoing war with the three sisters vying for the SandWing throne. The NightWings are known for their mysterious powers, which include the ability to see the future and read minds. A NightWing named Morrowseer issued a prophecy that predicts five dragonets from five different tribes will bring an end to the war. The five are a NightWing named Starflight, a MudWing named Clay, a SeaWing named Tsunami, a SandWing named Sunny, and a RainWing named Glory. There are problems, including that the prophecy calls for a SkyWing instead of a RainWing and Morrowseer is trying to manipulate the dragonets to ensure they choose the queen that will be most beneficial for the NightWings.

This is the fourth novel of the series. Thus far, the five dragonets of destiny have made many discoveries about the real world after living six years in total isolation. Glory is now queen of the RainWings. The dragonets still have no idea how they will bring an end to the war or who should be queen. Starflight is guarding a magic tunnel that connects the Night Kingdom to the Rainforest when the NightWings kidnap him. He meets five young dragons assembled to replace any members of the original group who will not obey Morrowseer's commands. Fatespeaker, the NightWing of that group, is brave and bubbly. She is in contrast to the NightWing tribe overall. Starflight soon makes a series of discoveries about the NightWing tribe and their current home. The NightWing fortress is built on an active volcano and is becoming increasingly inhospitable. There is little food, and the dragons are starving. There have been few dragonets born recently. Queen Battlewinner must remain in a pot of lava or die, the result of a fight with an IceWing. The NightWings know they must find another home. They have decided to kill the RainWings and take over the Rainforest. As Glory tries to reason with Battlewinner, earthquakes shake the island. Starflight comes up with an idea to let the NightWings live in part of the Rainforest if they are willing to submit to Glory as their queen. Battlewinner refuses, leaves her pot of lava, and dies. Her daughter, Greatness, never wanted to be queen. Greatness and other members of the tribe pledge loyalty while rushing to safety. Morrowseer is the last NightWing at the tunnel. He reveals that the dragonet prophecy was never real. He and Battlewinner made it up as part of a long-range plan to take the Rainforest. Sunny is especially hurt, having seen this prophecy as her purpose in life. She rushes away. Starflight and some of the other dragonets face Morrowseer as the volcano erupts, killing him. With the war still ongoing despite this new information, members of the various tribes continue their plans to fulfill personal goals, only sometimes considering others in the process.

More summaries and resources for teaching or studying The Dark Secret.