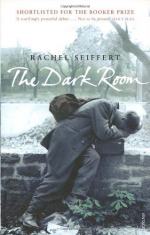 Rachel Seiffert
This Study Guide consists of approximately 60 pages of chapter summaries, quotes, character analysis, themes, and more - everything you need to sharpen your knowledge of The Dark Room.

This detailed literature summary also contains Topics for Discussion and a Free Quiz on The Dark Room by Rachel Seiffert.

The Dark Room, a set of three stories chronicling the events before, during, and after World War II in Germany, follows three characters in their journeys of self-discovery and acceptance. From Helmut, a physically disabled young man unable to join the war effort, to Lore, a young teenager responsible for assisting her four younger siblings in their escape to Hamburg, to Micha, a schoolteacher who discovers his grandfather's past as an SS man in the German military, these characters embark on harrowing journeys which test the foundations of all they know and love. A powerful novel filled with emotional and psychological discovery, The Dark Room draws a complete image of Germany's involvement in World War II and illustrates the lingering effects of that war on the countries youngest generations.

This novel, consisting of three individual stories, chronicles the experiences of German citizens before, during, and after World War II. Helmut, a young physically disabled man unable to join the German army, finds solace in the darkroom of a photographer as World War II begins to affect Berlin. When his parents are killed and his kindly employer disappears, Helmut is left to fend for himself, finally learning to be independent. During his trials, he captures the essence of war in Berlin on film and finally joins the German Army as Berlin falls to the Russian forces.

Lore, a young teenage girl, finds herself alone with her four siblings when her Nazi parents are captured and taken to labor camps. The second story of the novel follows Lore and her siblings as they attempt to flee to Hamburg to live with their grandmother. Along the way, they are helped by a seemingly Jewish prisoner, Tomas. Lore finds herself falling in love with Tomas and the children begin to see him as a father figure. Lore, confused by the images of Jewish extermination and unable to understand her parents' involvement in the Holocaust, struggles to come to term with the effects of being the child of Nazi parents in the immediate aftermath of the war. When Lore's brother, Jochen, is killed trying to cross the Russian border, she and her siblings find themselves depending on Tomas to take them to safety. Following their arrival in Hamburg, Lore discovers that Tomas is a Nazi criminal who has stolen the identity of a dead Jewish prisoner to escape the Russian Army. As Tomas flees, Lore is left with a myriad of conflicting emotions.

Micha, a young schoolteacher, is surprised to learn that his grandfather was a member of the German Waffen SS during the war. Obsessed by a need to discover the true nature of his grandfather, Micha journeys to Belarus, where he meets Jozef Kolesnik, a German who also fought in the war. Through Micha's conversations with Jozef, he learns that Jozef himself was a murderer of the Jewish people, and that Micha's own grandfather was also responsible for the deaths of many Jewish and Belarusian people. Unable to come to terms with his grandfather's crimes, Micha disassociates himself from his family, who Micha sees as unwilling to face reality. When Jozef dies, however, Micha travels back to Belarus to see Jozef's wife, Elena. Through Elena's grief and acceptance of her husband, Micha learns the true meaning of unconditional love, and is finally able to accept his grandfather's crimes and re-associate with his family.

Through the eyes of these individual characters, this novel presents a rare perspective on the Holocaust and the tragedy of World War II: that of the next generation of German citizens. Too young to participate in the war, these brave characters struggle to accept the truth of their county's heritage, as well as their own family's involvement in the atrocities of the war, and are able to find the courage and strength to accept themselves and their role in the aftermath of World War II.

More summaries and resources for teaching or studying The Dark Room.