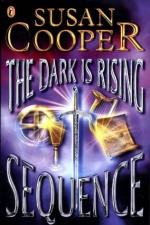 Susan Cooper
This Study Guide consists of approximately 43 pages of chapter summaries, quotes, character analysis, themes, and more - everything you need to sharpen your knowledge of The Dark Is Rising.

The Dark Is Rising Summary & Study Guide includes comprehensive information and analysis to help you understand the book. This study guide contains the following sections:

This detailed literature summary also contains Topics for Discussion and a Free Quiz on The Dark Is Rising by Susan Cooper.

Will Stanton discovers that he is an Old One, destined to protect the world against the Dark. Will must find and join six great Signs as a powerful tool in the eternal battle between good and evil.

On Midwinter's Eve, Will gets the first of the Signs as an early birthday present. Will wakes on his birthday in another time. He meets the Rider, his enemy, as well as the white mare, an almost magical horse that helps Will. Will also meets the Walker, a strange old tramp. Will goes into another time, where the Lady and Merriman Lyon explain that Will is the last of the Old Ones. They teach him about his powers and his quest to collect the six Signs. The Dark attacks them, and because of Will's impulsiveness, they are only saved through the Lady's sacrifice. When the Walker finds Will alone, Will gets the second Sign. Maggie Barnes, an agent of the Dark, arrives to try to take it. Merriman sends her away.

The Stantons go caroling at Miss Greythorne's Manor. While singing, Merriman and Will go to into another time unnoticed. Will attends the ceremonial renewing of the third sign. Will, Merriman, and his friend Hawkin retrieve the Book of Gramarye. Will absorbs everything from the book, learning his powers as an Old One before Merriman destroys the book. Hawkin, lured by the Dark, betrays the Old Ones. Will retrieves the third sign in his own time. Maggie and the Rider appear, but disappear when Will clumsily uses his powers. After church on Christmas, the Dark attacks again. The Old Ones hold the Dark off, only defeating it when Will uses his three Signs. After the battle, Will finds the fourth sign. The Stantons find the Walker unconscious in the snow and take him home.

The Manor serves as shelter during an intense winter storm. Will opens the Manor door to the Rider. Though Will's Signs send him away quickly, the Walker finds strength to begin summoning the Dark. The Dark forces burn as nine cold candles. Hawkin gets violent, and the doctor sedates him, breaking the Dark's link to the Manor. The Old Ones quickly gather the candles of the Dark and use them to create the fifth sign. Back in his own time, Will goes to look for his missing sister Mary. The white mare carries Will to an island in the river, where Hawkin tries to exchange the Signs for Mary. Even when the Rider appears, Will refuses to give in to the Dark. Mary lands safely on the snow, where Merriman whisks her to safety. A burial ship for an ancient king comes out of the island, and Will finds the sixth Sign. Merriman carries Will to the Great Park, where Herne's hunt vanquishes the Dark. The Rider discards Hawkin, who reconciles with Merriman before he dies. Will and Merriman take the Signs to John's smithy to be joined, completing Will's quest.

More summaries and resources for teaching or studying The Dark Is Rising.

The Dark Is Rising from BookRags. (c)2022 BookRags, Inc. All rights reserved.