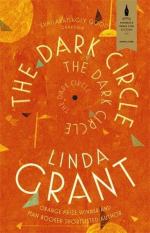 Linda Grant
This Study Guide consists of approximately 34 pages of chapter summaries, quotes, character analysis, themes, and more - everything you need to sharpen your knowledge of The Dark Circle.

This detailed literature summary also contains Quotes and a Free Quiz on The Dark Circle by Linda Grant.

The following version of this book was used to create this study guide: Grant, Linda. The Dark Circle. London: Virago Press, 2017.

The novel opens in London in 1949. Lenny and Miriam are 18-year-old twin siblings. Lenny is the protégé of their uncle Manny, a businessman. Miriam works at a flower shop. Both Miriam and Lenny face adversity because they are Jewish and anti-Semitism is prevalent in England. Soon, they are both diagnosed with tuberculosis and are sent to a tuberculosis hospital in the rural county of Kent. There, they struggle to adapt to the stultifying atmosphere of the hospital, but they soon become friends with their respective roommates, Colin and Valerie. Colin is a car salesman and Valerie is a university graduate.

Hannah Spiegel is one of the other patients. She is originally from Germany, where she was once in a Nazi concentration camp because she is a lesbian. Currently, Hannah is in a secret romantic relationship with Sarah Brooks, a television producer who lives in London. Lenny and Miriam become gradually more accustomed to hospital life, but they still find it boring and fear that they will be killed by their tuberculosis. Valerie suggests that she and Miriam pass the time by reading novels aloud to each other. Lenny and Hannah soon join the book group, and the four of them become friends.

One day, an American sailor named Arthur Persky is admitted to the hospital as a patient. He is energetic and rebellious, and he becomes determined to reject and alter the stultifying atmosphere of the hospital. He introduces rock and roll music to the hospital’s programs of recorded music, and he generally rejects all precepts of calm and obedience. Arthur and Miriam soon become attracted to one another. Meanwhile, Sarah seduces a government official, and the official agrees to have some streptomycin sent to the hospital where Hannah is being treated. Streptomycin is a new antibiotic that is very effective in treating tuberculosis. However, Peter sends only enough for six patients. Hannah, Lenny, Miriam, Valerie, and Arthur receive none of the streptomycin.

Miriam and Valerie begin to decline rapidly in health, and Valerie undergoes an operation to have one of her lungs removed. Uncle Manny manages to illegally acquire some streptomycin, and he secretly sends it to the hospital for Miriam. Arthur and Lenny inject Miriam with the antibiotic, and although it cures her tuberculosis, she loses her sense of hearing. Miriam, Lenny, Arthur, Valerie, and Hannah are discharged soon after, as the arrival of more streptomycin makes their tuberculosis easily treatable. All of them but Arthur then go on a vacation to Spain together, while Arthur travels on a ship by himself. He considers the idea of marrying Miriam, but he ultimately does not return. Over the following decades, Lenny and Valerie marry each other and become successful television producers. Lenny and Miriam remain in touch, but Miriam holds a slight grudge against Lenny regarding her hearing loss.

More summaries and resources for teaching or studying The Dark Circle.