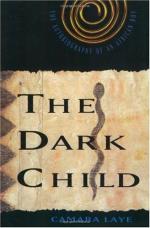 Camara Laye
This Study Guide consists of approximately 35 pages of chapter summaries, quotes, character analysis, themes, and more - everything you need to sharpen your knowledge of The Dark Child.

Because his father is so well known, there are always many apprentices staying at his forge. These apprentices are treated like children of the family, eating and sleeping with them. Laye thinks his mother treats the apprentices better than she treats her own children, but he doesn't hold a grudge about this.

Laye remembers one particular apprentice named Sidafa. Laye and Sidafa like to stay up late talking about their days, Sidafa having spent the day in the forge and Laye having been at school. Laye's mother doesn't like...

More summaries and resources for teaching or studying The Dark Child.