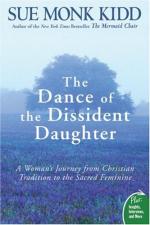 Related Topics
The Book of Longings

The Dance of the Dissident Daughter: A Woman's Journey from Christian Tradition to the Sacred Feminine Summary & Study Guide

Sue Monk Kidd
This Study Guide consists of approximately 52 pages of chapter summaries, quotes, character analysis, themes, and more - everything you need to sharpen your knowledge of The Dance of the Dissident Daughter.

The Dance of the Dissident Daughter: A Woman's Journey from Christian Tradition to the Sacred Feminine Summary & Study Guide Description

The Dance of the Dissident Daughter: A Woman's Journey from Christian Tradition to the Sacred Feminine Summary & Study Guide includes comprehensive information and analysis to help you understand the book. This study guide contains the following sections:

This detailed literature summary also contains Topics for Discussion and a Free Quiz on The Dance of the Dissident Daughter: A Woman's Journey from Christian Tradition to the Sacred Feminine by Sue Monk Kidd.

THE DANCE OF THE DISSIDENT DAUGHTER is writer Sue Monk Kidd's memoir of her odyssey of feminist rebirth, shaking off the chains of patriarchy, learning to embrace her feminine soul, and telling the world some badly-needed truths.

Sue Monk Kidd, a successful freelance writer of articles for Christian publications and lecturer on spirituality begins to feel constricted by her Southern Baptist faith and examining earlier mystical traditions and liturgical churches leaves her feeling left out as a woman. Husband Sandy is a Southern Baptist minister, religion teacher, and college chaplain. They are married 19 years when Sue's quest begins. Sandy is not rigid or authoritarian, never demands that Sue "submit," but he initially resists her journey based on non-verbalized fears about what will happen to their relationship.

Sue's quest begins slowly when she sees herself giving birth to herself in a dream. At a retreat, she embarrasses herself by introducing herself as Fr. Sue. In the forest at the monastery, Sue builds a Big Bird nest and begins nurturing her Feminine Wound. Feminist works of art, ancient and modern, move her and inspire her to study. She takes time off for a spiritual retreat, which Sandy resents. She learns much and pours out everything when she returns. Sandy surprises her by saying he has realized how he has been defending the status quo and excluding her experience. Sandy's transformation takes years of reading, questioning, and struggling.

During the quest, Sue sometimes wants to run away from what she sees but cannot. At a Jungian retreat, she watches dancing women by the sea but cannot join in. At best, she touches a turtle shell - and turtles become a powerful and recurring force in her life. Sue studies patriarchy critically, discovering how systematically and subtly it creates in women a gaping inner hole. Sue fills with both fury and fear but feels stuck in place, until she is energized by seeing two men laughing at her daughter Ann stocking toothpaste on her knees. Sue moves forward for herself, for Ann, and for all women.

Sue feels at home in a circle of trees, learns to dance, to make rituals, to open herself to myths, to face off internal patriarchal voices, and to bury them. She opens to the Divine Feminine, overcomes the Judeo-Christian taboo of speaking of Goddesses and feels her consciousness expanding to connect to the whole earth. She achieves peace with male-dominated Christianity as she sees hopes that the feminine can achieve balance. Sue begins to heal and yearns to bear brave witness to the world. She becomes one-in-herself. Sue is happy for all she has gone through, before and after reconstruction. That someone or something always appears when she needs it makes her grateful.

As the book ends, Sandy is driving them home from dropping off daughter Ann at college. Sue has left Ann a note encouraging her to develop as a woman and always speak the truth. Sandy asks Sue what she is mulling over in silence and hears a cogent summary of her six-year quest. Never before has she thought about it so systematically. Over the next two years, she writes this book, and leaves readers with the message: "She is in us."

More summaries and resources for teaching or studying The Dance of the Dissident Daughter: A Woman's Journey from Christian Tradition to the Sacred Feminine.

The Dance of the Dissident Daughter: A Woman's Journey from Christian Tradition to the Sacred Feminine from BookRags. (c)2022 BookRags, Inc. All rights reserved.