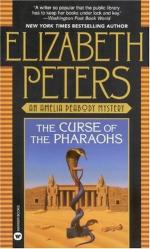 The Curse of the Pharaohs Summary & Study Guide

Elizabeth Peters
This Study Guide consists of approximately 28 pages of chapter summaries, quotes, character analysis, themes, and more - everything you need to sharpen your knowledge of The Curse of the Pharaohs.

The Curse of the Pharaohs Summary & Study Guide Description

The Curse of the Pharaohs Summary & Study Guide includes comprehensive information and analysis to help you understand the book. This study guide contains the following sections:

This detailed literature summary also contains Topics for Discussion and a Free Quiz on The Curse of the Pharaohs by Elizabeth Peters.

The Curse of the Pharaohs is a mystery novel in a series about Amelia and Radcliffe Emerson, English Egyptologists. The story is set around the turn of the 20th century in the Valley of the Kings. While the Emersons are trying to create a normal English life for their son, Ramses, they are sorely missing their seasonal trips to excavate in Egypt. An opportunity arises for them to return to Egypt when the widow of Sir Henry Baskerville asks Emerson to take over the dig. Emerson and Amelia arrive in the Valley of the Kings and soon become involved in trying to discover who is committing the murders and attacks upon the group.

Amelia suspects each of the characters for either committing or aiding in the commission of the crimes. She believes Lord Baskerville was murdered by either Alan Armadale, the original archaeologist or Lady Baskerville, Lord Baskerville's wife. The attacks on Emerson are thought by Amelia to be committed by Madame Berengeria, one of the locals, Armadale, or the reporter, Kevin O'Connell. Each of the group's members, Miss Mary, Karl, Arthur, and Cyrus Vandergelt are suspiciously eyed by Amelia in her quest for the truth.

After Lord Baskerville is murdered, a servant is brutally murdered, and the group begins seeing a mysterious Woman In White around the house. Emerson receives a blow on the head from a projectile while in the house, and Arthur is attacked in his sleep and falls into a coma. Madame Berengeria confuses everyone with her drunken accusations and one night gets too close to the truth for someone; she is found dead the next day. Alan Armadale, missing from the beginning, is found dead in a cave. Emerson tries to force the murderer out into the open by implying he will be hearing from a courier with a message about the murderer. This works, as Lady Baskerville comes to the tomb dressed as the Woman In White to murder Emerson. Amelia catches her and Lady Baskerville is turned over to the authorities. To obtain the Baskerville wealth, Lady Baskerville murdered Lord Baskerville and Alan Armadale using a lethal hat pin.

The Emersons relax after the murderer is finally imprisoned, and plan their next adventure.

More summaries and resources for teaching or studying The Curse of the Pharaohs.

The Curse of the Pharaohs from BookRags. (c)2022 BookRags, Inc. All rights reserved.