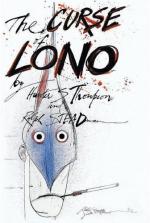 Plot Summary
+Chapters Summary and Analysis
Frontmatter and The Blue Arm
Adventures in the Dumb Life and Fire in the Nuts
He Was Not One of Us and The Doomed Generation
Why Do They Lie to Us? and Tits Like Orange Fireballs
There Are No Rules and Trapped in a Queer Place
Bomb Fever and South Point
We're All Equal in the Ocean and The Land of Po
The Balcony Life and Kicking Ass in Kona
Fuck You, I'm Rich and Driving the Saddle Road
A Dog Took My Place and We Killed Like Champions
Yesterday's Weirdness Is Tomorrow's Reason Why and Rage, Rage against the Coming of the Light
Free Quiz
Characters
Objects/Places
Themes
Style
Quotes
Topics for Discussion
Order our The Curse of Lono Study Guide

Hunter S. Thompson
This Study Guide consists of approximately 25 pages of chapter summaries, quotes, character analysis, themes, and more - everything you need to sharpen your knowledge of The Curse of Lono.

The Curse of Lono Summary & Study Guide includes comprehensive information and analysis to help you understand the book. This study guide contains the following sections:

This detailed literature summary also contains Topics for Discussion and a Free Quiz on The Curse of Lono by Hunter S. Thompson.

In The Curse of Lono, Hunter Thompson travels to Hawaii to cover a race for a magazine. The trip turns into an extended stay. Though troubled with lousy weather, Hunter explores Hawaii's lore and legend, beach life, and fishing culture, in his unique and legendary way.

Hunter Thompson is hired by Running magazine to cover the Honolulu marathon. He invites his longtime friend, the artist Ralph Steadman, to pack up his family and join him in Hawaii. En route to Honolulu, Hunter meets and befriends a wealthy entrepreneur named Ackerman. The two agree to meet up later in Kona. In Honolulu Hunter is picked up at the airport by Gene Skinner, a man whom Hunter knows as a former opium trafficker and pilot for the CIA. Gene was hired as Hunter's photographer.

Hunter discovers that Ralph injured his back in a recent snorkeling accident. Anxious to have Ralph functional for the marathon party that evening, Hunter tends to his injury. That night, Hunter and Ralph attend the party, but the still-injured and ill-tempered Ralph puts a damper on the festivities. The next day, Hunter, Gene and Ralph cover the marathon, yelling profanities at the runners as they go by. Their assignment finished, Ralph and Hunter move to their rented compound in Kona.

Hunter is disappointed to learn the compound is less secluded and less glamorous than advertised. Hunter's new friend, Captain Steve, wants to take Hunter and Ralph out on a fishing expedition, but the constant rain makes this impossible. With the compound located right on the shoreline, Hunter begins to worry about the ever-worsening weather. Anxiety runs high as the storm prohibits outdoor activity and waves begin to push their way into the compound.

Hunter, Steve and Ackerman brave the storm in a near-disastrous, drug-addled boat outing. They return to find the compound flooded and Ralph gone back to England with family in tow. Hunter moves to the hotel where Ralph was staying, there to look after Ralph's dog, left behind due to its intense red-flea infestation. There in two adjoining, red-flea-quarantined suites, Hunter secretly helps Ackerman package and mail an entire harvest of marijuana.

Everyone, Hunter included, is surprised to see that he is still in Hawaii. Hunter hangs around with fishermen, hating their macho superiority and heaping abuse upon them whenever possible. Finally Hunter himself goes out on the waves and manages to catch a large marlin, the most prestigious fish possible. Seeking to subdue the fish, Hunter shocks the crew by crushing its skull with an antique Samoan war club.

While weighing the fish, Hunter makes a spectacle of himself, loudly ranting and raving. Onlookers are offended when Hunter arrogantly identifies himself as the Hawaiian god Lono, returned at long last. The faux pas proves disastrous. His life now in danger, Hunter flees to the ancient City of Refuge, where legend tells that any man may find sanctuary, regardless of his crimes. Safe in the city, park rangers provide him necessary goods and services while he smokes, drinks and writes of his Hawaiian experience.

More summaries and resources for teaching or studying The Curse of Lono.

The Curse of Lono from BookRags. (c)2022 BookRags, Inc. All rights reserved.