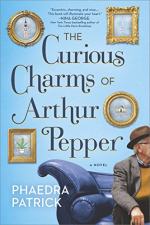 Phaedra Patrick
This Study Guide consists of approximately 42 pages of chapter summaries, quotes, character analysis, themes, and more - everything you need to sharpen your knowledge of The Curious Charms of Arthur Pepper.

This detailed literature summary also contains Quotes and a Free Quiz on The Curious Charms of Arthur Pepper by Phaedra Patrick.

The following version of this book was used to create this study guide: Patrick, Phaedra. The Curious Charms of Arthur Pepper. MIRA Books. 2016.

The Curious Charms of Arthur Pepper is a novel focused on the transformative journey of its protagonist, Arthur Pepper, following the death of Arthur’s wife and his discovery of a mysterious charm bracelet that she left behind. The narrative is related from a limited-perspective third person narrator focused on Arthur’s point of view. When the novel begins, Arthur is sad and lonely. His wife has been dead for a year. He does not see much of his grown daughter, the divorced Lucy, and his grown son Dan has his own family and business in Australia. Arthur takes comfort in his daily routine because it is something that reassures him as always being there. He is looked after by his younger neighbor Bernadette, who herself is a widower with a teenage son set for college.

Arthur decides the one-year anniversary of Miriam’s death is time enough to clean out her old things and begin to move on. In one of her boots, he discovers a gold bracelet with eight charms–including an elephant, a flower, a book, a paint palette, a tiger, a thimble, a heart, and a ring. Arthur cannot recall seeing the bracelet before, and discovers a phone number from India on the elephant. Curious, Arthur calls the number, and speaks with a gentleman named Rajesh Mehra who reveals Miriam was once his nanny. Arthur did not know that Miriam had ever been to India. Rajesh encourages Arthur to learn about all the charms; at the same time Arthur decides he needs to know more.

As the novel unfolds, Arthur finds himself traveling all over England in pursuit of the clues emanating from the charms. Along the way, he grows much closer to Bernadette (with possible romance in the future) while serving as a good male role model to her son. Arthur also reconnects with his own children, who come to support Arthur in his journey. Arthur struggles to understand why his wife would keep so much of her life a secret from him, but through chance encounters with good strangers, he comes to consider their thoughts that perhaps the past did not matter to Miriam like the present did. Arthur struggles to accept this, and to accept some of the things he learns–such as that his wife once had an affair with a famous French novelist, and that his wife was the passenger in a car accident that killed her then-boyfriend, the younger brother of Miriam’s childhood friend, Sonny Yardley.

Arthur comes to realize that he loves his wife no matter what, and that if she did not tell him about her past, it was for the best. He receives a bundle of letters from Sonny Yardley written to her by Miriam. Arthur reads through the letters, reads about how Miriam had fallen in love with him and how much she wanted to devote her life to him–and then he destroys the letters to symbolically let go of the past. As the novel ends, Arthur and Lucy have plans to go to Australia to visit Dan for Christmas, while Lucy is now dating one of Arthur’s neighbors. Before Australia, Arthur travels to India to experience a new culture, and to meet Rajesh Mehra.

More summaries and resources for teaching or studying The Curious Charms of Arthur Pepper.