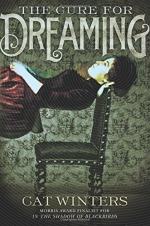 Related Topics
In the Shadow of Blackbirds

Cat Winters
This Study Guide consists of approximately 43 pages of chapter summaries, quotes, character analysis, themes, and more - everything you need to sharpen your knowledge of The Cure for Dreaming.

The Cure for Dreaming Summary & Study Guide includes comprehensive information and analysis to help you understand the book. This study guide contains the following sections:

This detailed literature summary also contains Quotes and a Free Quiz on The Cure for Dreaming by Cat Winters.

The Cure for Dreaming is set during the suffrage movement of the 1900’s. The story follows the course of Olivia, a young teenager who is celebrating her 17th birthday. She’s with her two best friends, Frannie and Kate. Earlier in the day, all of the girls had participated in a pro suffrage march at the courthouse. Olivia was terrified that her father was going to find out, since he doesn't approve of the suffrage movement and just wants Olivia to be a good, submissive girl.

The girls are celebrating Olivia’s birthday by going to visit a famous hypnotist, Henri. Henri chooses Olivia from the crowd when he finds out that she’s celebrating her birthday. He’s easily able to put her under his spell. She doesn’t remember the incident, but everyone assures her afterwards that she was in a complete trance. Henri was able to stand on her, play drums right next to her head, and even poke her with needles and she didn’t react.

When Olivia is leaving she’s approached by the judge’s son, Percy. Olivia had a crush on Percy because she considered him to be well above her station. He offered to take her home, something she was happy to accept. Percy meets Olivia’s father and formally asks her out on a date, something that her father agrees to. Olivia is happy because her father seems to have no idea about the suffrage rally she attended. Before she goes to bed, he confronts her about it, and warns her against ever going to a demonstration. He mentions that he’s afraid Olivia will end up like her mother, whom Olivia later reveals left the family because she felt suffocated at home.

Olivia’s father continues to grow concerned about her behavior. He arranges for Henri to meet with Olivia again. He forces Henri to hypnotize her, making it so she’s able to see the world for how it truly is. He also makes it so whenever Olivia is unhappy she can’t complain, all she can do is say that all is well. Olivia starts to see the world in a twisted way. Many of the men she encounters are vile monsters, including her father.

Things continue to worsen for Olivia. When she’s out with Percy, she’s unable to try and resist him when he tries to force himself onto her. She’s able to escape from him, but she’s still in trouble because she’s still under the hypnotism. She hunts down Henri, who she starts to call by the normal name of Henry. He explains that he had to put her under because his sister is dying from a tumor. He needed the money from her father to operate on her, but he only gets it once her father knows she’s completely under his spell.

Olivia and Henry decide to team up when they discover that Olivia’s father wants to display her to the anti-suffrage movement. He wants them to see how effective hypnotism is in silencing women. He takes the hypnotism even further, making Olivia sick whenever she hears certain pro suffrage phases. Each step he takes just pushes Olivia further away from him, and encourages her to become more active in the suffrage movement.

Olivia and Henry are able to trick the anti-suffrage movement. They put all the women there under hypnotism so they cannot speak. The women are upset and try to plead for their voices to be returned. Henry points out the hypocrisy, making them realize opposing suffrage is just like taking away a woman’s voice. The suffrage group helps Henry and Olivia raise the money they need to help his sister, and Olivia is able to escape to New York to live with her mother and pursue her dreams of becoming a journalist.

More summaries and resources for teaching or studying The Cure for Dreaming.

The Cure for Dreaming from BookRags. (c)2022 BookRags, Inc. All rights reserved.