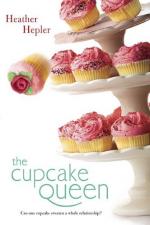 Heather Hepler
This Study Guide consists of approximately 22 pages of chapter summaries, quotes, character analysis, themes, and more - everything you need to sharpen your knowledge of The Cupcake Queen.

This detailed literature summary also contains Topics for Discussion on The Cupcake Queen by Heather Hepler.

The Cupcake Queen is a novel by Heather Hepler. The story follows the main character, Penny, as she tries to put the pieces of her life together after her parents separate and she moves with her mother from New York City to Hog's Hollow. Penny's mother, Lizzie, opens a bakery that only sells specialty cupcakes. Penny is the primary designer, sketching and finding ways to turn the sugary creations into works of art. When Penny and her mother first to move to town to live with Gram, Penny believes the move is only temporary. She can't wait until the day comes when her parents tell her they are getting back together and she and her mom are moving back to the city.

Penny meets her arch nemesis, Charity, when she is helping her mother set up for Charity's Sweet 14 party of the Hog's Hollow Country Club. When Charity's father sends the refreshment table to collapse, Penny and her mother take the blame for it and Charity vows to make Penny's time a living hell. A few days later, school starts, and sure enough, Charity and all of her friends continue to taunt and bully Penny.

Penny makes two new friends, Tally and Blake. She also has a crush on a boy, Marcus. Slowly, Penny finds her way in the town of Hog's Hollow. During her journey, she also uncovers some details about her mom that she once didn't know, such as the fact that her mom was Hog's Hollow Queen for the four years she was in high school—even beating out Charity's mom all four years. In the end, Penny has the choice to go live with her father or stay living wither mother. she chooses to stay in Hog's Hollow because she has come to think of it as home and just the way that her life should be.

More summaries and resources for teaching or studying The Cupcake Queen.