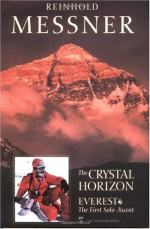 Reinhold Messner
This Study Guide consists of approximately 31 pages of chapter summaries, quotes, character analysis, themes, and more - everything you need to sharpen your knowledge of The Crystal Horizon Everest-the First Solo Ascent.

The Crystal Horizon: Everest—The First Solo Ascent, by Reinhold Messner, translated from the German by Jill Neate and Audrey Salkeld, is an account by a famous climber of his successful and solo assault on the world's tallest mountain. In 1980, without the aid of oxygen bottles or other "high-tech" assistance, the thirty-five-year-old Messner became the first person ever to reach the summit of Mount Everest while climbing alone. Later in his career, the Italian adventurer became the first man to climb all 14 of the world's mountains that are taller than 8,000 meters or 26,247 feet. Messner, who had written a number of books prior to the publication of this one in 1989 and who since has written many others, fashions a tale rife with curiosity, awe, fear, and determination. He offers a selected history of previous attempts to climb Everest through the decades, including a number of successful group efforts as well as several famous failures and two previous solo expeditions that ended short of the summit. Those accounts are adapted from books by other authors. Messner's text, interspersed with photographs taken by him and assembled from other sources, also discusses the history, culture, and contemporary state of Tibet, which had been closed to foreigners until the year before Messner undertook his expedition.

He is accompanied part of the way by two Sherpas but his main companion is a young American woman named Nena Holquin who became his girlfriend shortly before the Everest climb. Nena is Messner's only companion on the trek to the upper base camp at an altitude of 6,500 meters where she waits for four days while Messner completes the final climb to the summit at 8,848 meters and the descent. The heart of the book is Messner's description of the slow deterioration of his physical and psychological condition as he labors ever-upward, through air so thin that only a few steps can be taken before rest is required. The indomitable will required for such an effort, especially without contact with anyone else and with the constant danger of avalanches or of falling into a crevasse, is powerfully drawn. At the height of the drama, Messner must struggle not only with exhaustion but with voices and other mental aberrations that often assail mountaineers at high altitudes. Excerpts from the diary of Nena Holquin are scattered throughout the text, adding valuable insight into the personality and moods of the mercurial Messner. His own reflections on why people climb and what drives him are also revealing. In providing a glimpse into the mind and personality of an intrepid mountaineer as he achieves a tremendous feat, the book demonstrates how pure willpower can carry a person beyond what normally would be the limits of physical and emotional capacity.