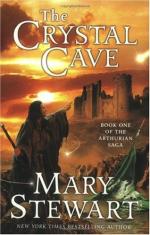 Mary Stewart
This Study Guide consists of approximately 68 pages of chapter summaries, quotes, character analysis, themes, and more - everything you need to sharpen your knowledge of The Crystal Cave.

Merlin goes back down the hill from the cave and Galapas. As he enters his home compound, he notes that there is increased activity. He finds that the High King Vortigern is going to Segontium and his grandfather is going to meet him.

Merlin recounts how the High King claimed the throne when King Constantius died suddenly. The dead King's younger brothers fled to their cousin Budec in Les Britain. The rumors were that the two princes, one of whom was Ambrosius, were said to have gone to Rome, and Uther said to be a mercenary in the service of the Emperor of the East. Rumors persisted that Ambrosius, King Burdec and Uther were coming to take back Greater Britain from King Vortigern and his Saxon Wife.

Merlin recounts the story of how their brother King Constantius was killed and probably...

More summaries and resources for teaching or studying The Crystal Cave.