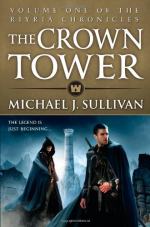 Michael J. Sullivan
This Study Guide consists of approximately 58 pages of chapter summaries, quotes, character analysis, themes, and more - everything you need to sharpen your knowledge of The Crown Tower.

This detailed literature summary also contains Quotes and a Free Quiz on The Crown Tower by Michael J. Sullivan.

The Crown Tower by Michael J. Sullivan is a story of a young man who has lost his way in life and how a friend of his family attempts to set him back on the path of his destiny. His path crosses that of a second main character named Gwen DeLancy. In the course of the story, Hadrian's and Gwen's destinies are fulfilled.

Hadrian Blackwater ran away from home when he was fifteen because he felt his father was holding him back from achieving his full potential. After five years on his own, he now sees that running away was a mistake. He has done things he is not proud of and would not want his father to know. Hadrian receives word that his father has died. His father has left a last request of Hadrian. Hadrian learns about the request from Professor Arcadius at Sheridan University. Arcadius tells Hadrian that his father wanted him to have a purpose in his life. Arcadius sends him on a job to steal a book. Hadrian's partner in the theft will be Royce Melborn. Royce and Hadrian are opposites. Arcadius hopes the two will bond during their time together and become a team.

Gwen DeLancy is waiting for her destiny to unfold. As Gwen and her mother are traveling to Medford, her mother dies. Her mother’s dying words are for Gwen to promise to go to Medford and make a life there. A man comes to pay his respects to her mother and gives Gwen six coins. He tells her to use one coin to bury her mother because she deserves the best. One coin is for Gwen to travel to Medford. She must keep the four remaining coins. She is not to spend them until it is absolutely necessary. A desperate man will come to Medford in the night dressed in his own blood and begging for help. Gwen must save him.

Gwen takes her destiny seriously and only uses the coins when her life is in danger. It allows her to have a place for the man when he comes to Medford. The paths of Gwen, Hadrian, and Royce are interwoven throughout the story. Their destinies combine at the end to fulfill Gwen’s promise to the man and her mother.

More summaries and resources for teaching or studying The Crown Tower.