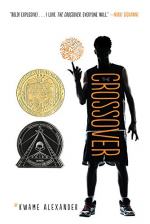 Kwame Alexander
This Study Guide consists of approximately 39 pages of chapter summaries, quotes, character analysis, themes, and more - everything you need to sharpen your knowledge of The Crossover.

The Crossover Summary & Study Guide includes comprehensive information and analysis to help you understand the book. This study guide contains the following sections:

This detailed literature summary also contains Quotes and a Free Quiz on The Crossover by Kwame Alexander.

“The Crossover” is a young adult novel by Kwame Alexander that follows the life experiences of 12-year-old basketball player Josh Bell across several months in the autumn and early winter of his seventh-grade year at Reggie Lewis Middle School. Josh is the identical twin brother of Jordan “JB” Bell, the son of Crystal Bell, the assistant principal, and the son of Chuck Bell, a former basketball superstar who is well-known and well-respected even years after his career ended. Josh and JB both love basketball, but it is Josh who truly admires and wishes to emulate his father by following in his father’s footsteps. For Josh, basketball is not merely about fame at school, or future fortune, but because he truly does have a love – a deep and abiding passion – for the game itself. He loves his family dearly, and loves the way life is going for him.

Things begin to change soon for Josh, however. JB gets a girlfriend, and begins spending less and less time with Josh and Chuck. Josh begins to feel lonely, and jealous of JB, leading to anger on the part of Josh. After a failed bet with JB leads to JB accidentally cutting off five of Josh’s dreadlocks, Josh must have his head shaved, and his anger toward JB only increases. At the same time, Chuck’s health takes a precipitous decline, as his lifetime of poor eating habits combined with a genetic predisposition to heart conditions finally catches up to him, causing him to experience numerous symptoms from nosebleeds to coughing fits to mild heart attacks. Josh’s anger spills over during a basketball game when he intentionally throws a hard pass at JB’s face, striking him squarely on the nose, and nearly causing a break. As a result, the relationship between the brothers is nearly broken as well, leading to JB giving Josh the cold shoulder for much of the novel.

Ultimately, Chuck has a major heart attack, and is admitted to the hospital. Josh realizes that his father’s superstar feeling of invincibility, his young age of 39, his horrible eating habits, and his distrust of doctors, have all led to Chuck’s heart attack. Over the next few weeks, Chuck suffers two more major heart attacks, the second of which ultimately kills him. Chuck’s death seems to suck all the light out of Josh’s life, but Josh comes to understand that he still has his brother, JB. JB feels the same way, and as such, both brothers renew their relationship. Josh comes to understand that JB will symbolically take his father’s place, and aside from their mother, the brothers realize that all they have are each other.

More summaries and resources for teaching or studying The Crossover.

The Crossover from BookRags. (c)2022 BookRags, Inc. All rights reserved.