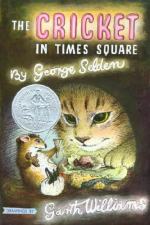 George Selden
This Study Guide consists of approximately 41 pages of chapter summaries, quotes, character analysis, themes, and more - everything you need to sharpen your knowledge of The Cricket in Times Square.

The Cricket in Times Square Summary & Study Guide includes comprehensive information and analysis to help you understand the book. This study guide contains the following sections:

This detailed literature summary also contains Quotes and a Free Quiz on The Cricket in Times Square by George Selden.

Tucker is a mouse who lives in an abandoned drain pipe in the Times Square subway station. He lives close to a newsstand in the station owned by Mario Bellini’s parents. It sells everything from newspapers to magazines. Tucker’s best friend is Harry Cat, a large tiger cat who also lives with Tucker.

Chester Cricket lives in a tree stump bordering a meadow. One day a group of people come for a picnic. Chester hops down to them and climbs inside one of the picnic baskets, sampling liverwurst, hard-boiled eggs, roast chicken, and beef. He eats and then falls asleep in the basket. When he wakes up, he discovers that one of the picnickers has placed an uneaten sandwich on top of him, pinning him inside. He is stuck inside the basket as people move it into a car and then onto a train, taking him far away from home. When the train finally stops, Chester finds himself in a New York shuttle subway station.

At first, he is too afraid to do more than just lie in the dirt where he landed, until he finally becomes so nervous that he chirps aloud. Mario hears him, pulls him out of the basket, and brings him to the newsstand. Mario feeds him and makes Chester a bed out of a matchbox. Chester soon proves to have remarkable skills and a great memory, being able to play any song after hearing it just once. Soon he is able to play a variety of classical, religious, and even contemporary songs flawlessly. The story soon spreads as more and more people come to witness the musical cricket. Although the newsstand has gained notoriety and he is happy for Mario and his family, Chester wants to go home. He misses the meadow and he misses singing just for the sake of singing, for no reason other than that he feels joyful.

More summaries and resources for teaching or studying The Cricket in Times Square.

The Cricket in Times Square from BookRags. (c)2022 BookRags, Inc. All rights reserved.