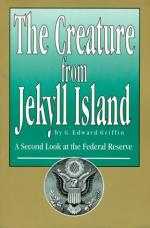 The Creature from Jekyll Island: A Second Look at the Federal Reserve Summary & Study Guide

The Creature from Jekyll Island: A Second Look at the Federal Reserve Summary & Study Guide Description

The Creature from Jekyll Island: A Second Look at the Federal Reserve Summary & Study Guide includes comprehensive information and analysis to help you understand the book. This study guide contains the following sections:

This detailed literature summary also contains Topics for Discussion and a Free Quiz on The Creature from Jekyll Island: A Second Look at the Federal Reserve by G. Edward Griffin.

The author's primary theme was that central banking that used fiat money has led to failures, encouraged wars and became an instrument of totalitarianism. The central bank of the US was conceptualized in 1910 during a secret meeting on Jekyll Island off the coast of Georgia. Through various political and financial manipulations by a handful of wealthy people, the US central bank was created and deceptively named the Federal Reserve System, commonly called the Fed. The name was purposefully selected to fool people into thinking that the Fed was a part of the Federal government. Many other misconceptions have been presented as fact in colleges and universities for their economics studies, including that the Fed prevented depressions and recessions. History has demonstrated that this was not true with the Great Depression, the boom-bust business cycle, and the Savings and Loan or S&L crisis of the 1980s.

The author proposed that the US should return to money based on the intrinsic value of a precious metal. Silver with gold as an auxiliary metal was his ideal solution. This money would replace fiat money, which had no backing of any sort. He acknowledged that this transition would involve financial crisis for many people, but that the resulting stable economy would be worth the effort.

Central to the author's argument was conspiracy theory. The wealthy financiers of the world wanted to dominate by bringing all countries into the central banking system and eventually under a world government. All countries would use the same currency as well, regulated by the International Monetary Fund or IMF and the World Bank. The UN would police the world with so-called peace-keeping forces. In effect, the world would become entirely socialistic. Capitalism would no longer be practiced. The author pointed out that nearly all the players in this conspiracy had at one time served on the Council on Foreign Relations or CFR. This was characterized as a training ground for the conspirators.

Many other conspiracy theories common today could have branched out from this one. The idea that the US should quit the UN and send it elsewhere than New York City has been promoted. Fear of a UN military force hiding in hollowed out mountains has been expressed, as well as suspicion that black UN helicopters have been patrolling the nation. A conspiracy theory has developed that the US government was secretly behind the 9/11 terrorist attacks. Whether any of these conspiracy theories turn out true may not have been as important as the attraction many people had for them. The author claimed repeatedly that his ideas about economics did not constitute a conspiracy theory, yet the argument contained all the hallmarks of conspiracy theory. Small groups of powerful men kept meeting secretly. These men knew all along what they wanted to happen, and that was to destroy the United States of America. Furthermore, in the absence of direct evidence, the author pointed to known outcomes and interpreted them not as mistakes, but the goals of a master plan.