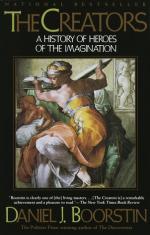 Daniel J. Boorstin
This Study Guide consists of approximately 39 pages of chapter summaries, quotes, character analysis, themes, and more - everything you need to sharpen your knowledge of The Creators.

The Creators Summary & Study Guide includes comprehensive information and analysis to help you understand the book. This study guide contains the following sections:

This detailed literature summary also contains Topics for Discussion and a Free Quiz on The Creators by Daniel J. Boorstin.

The prologue encompasses Parts 1-2 and offers an overview of religions and how they affected man's abilities to create. These religions include very basic surveys of Hinduism, Confucianism, Taoism, Buddhism, Homeric verse, Judaism, Theology, Christianity and Islam.

Book 1 includes Parts 3-5 and focuses on the early creation of mankind. Part 3 is centered on architectural advances in history, such as the pyramids and the Pantheon, while Part 4 highlights early visual arts, such as cave drawings and the battle against images by both the Christian Iconoclasts and Muslims. Part 5 hones in on performance art, showing how the dithyramb developed into comedy and tragedy, as well as the creation of prose for purposes of persuasion.

Book 2 consists of Parts 6-10 and provides an emphasis on re-creations of previous creations. Part 6 covers the humanities as it was affected by the emerging religion of Christianity, and Part 7 focuses on the development of literature, starting in the Middle Ages and continuing through to the eighteenth century. Part 8 focuses on visual arts, Part 9 emphasizes the creators in the sphere of music, and Part 10 concentrates on various other creations, such as photography and the skyscraper.

In Book 3, which is comprised of Parts 11-12 and the epilogue, the author focuses on the creation of the self, mainly in literature. Part 11 focuses on literature exclusively, including essay, biography, autobiography, and several influential authors: Goethe, Wordsworth and T. S. Eliot. Part 12 fixates on literature also, but the final section is focused on the stylistic inventions of Pablo Picasso. Some of the authors examined in Part 12 include the following: Herman Melville, Fyodor Dostoevsky, Franz Kafka, Marcel Proust, James Joyce, and Virginia Woolf. The Epilogue provides a very brief exploration of film and its association with the public, who acts as a participant by being the audience.

More summaries and resources for teaching or studying The Creators.

The Creators from BookRags. (c)2022 BookRags, Inc. All rights reserved.