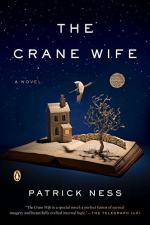 Patrick Ness
This Study Guide consists of approximately 53 pages of chapter summaries, quotes, character analysis, themes, and more - everything you need to sharpen your knowledge of The Crane Wife.

This detailed literature summary also contains Quotes and a Free Quiz on The Crane Wife by Patrick Ness.

The following version of this book was used to create this study guide: Ness, Patrick. The Crane Wife. Canongate Books Ltd, 2013.

At the beginning of the novel, George Duncan, a nice but lonely divorced man hears a noise that causes him to go outside in the middle of the night. Once there, he finds a crane in his backyard with an arrow in its wing. After first thinking that he cannot remove the arrow, George finally takes action and saves the crane. The next day, a mysterious woman named Kumiko comes to his printing shop to see if the shop can reproduce her work: tiles made of feathered cuttings. George has just created a cutting that Kumiko recognizes as a crane. George is instantly attracted to her and the two begin to date each other. Kumiko takes George’s crane and adds it to one of her tiles, which creates an amazing work of art. A customer comes in, sees it, and wants to buy it. George does not want to sell it, but Kumiko comes in with another tile and encourages George to sell that one. After that, people come in looking for tiles to buy.

At the same time, George’s daughter Amanda is also leading a lonely life as a single, divorced mother. She works with two women, Rachel and Mei, whome she tries and fails to befriend, which is common for Amanda. She has a son, JP, whom she loves. She also still loves her ex-husband, but he now lives in France with his new partner. As things become more and more serious between George and Kumiko and the tiles sell for high prices, Amanda wants to meet Kumiko and does so one day during her lunch break. Kumiko gives her a tile that makes Amanda think of forgiveness and love.

It turns out that George has had a sexual relationship with Amanda’s friend Rachel as well. When news spreads about the success of the tiles, Rachel starts to harass George and says that she wants to be with him.

George and Kumiko decide to get married, and they announce their engagement at a party he holds. After that, he and Amanda have a disagreement and stop talking because Amanda wonders whether he is moving too quickly.

Kumiko wants to finish her story, but George needs to create a cutting for the last tile. One night, when Kumiko is not at George’s residence, he calls Rachel and they sleep together. After that he feels guilty, and the tension helps him create a cutting of a volcano. He is so excited that he goes to Kumiko’s apartment, unannounced, to show her what he has created. When he gets there he sees Rachel coming out of the apartment and once he goes in, sees Kumiko in her crane form working on the tile. Then he finds Kumiko by his side and she tells him that he has a fever. They go to his place and wake up to discover that the house has been engulfed by a fire. Rachel has called Amanda who rushes there with her son. Amanda goes into the house looking for George and Kumiko. George gets out and Kumiko asks him to perform the forgiveness ritual on her. He cannot and when she tries to convince him Rachel intervenes. The volcano has been in Rachel’s body for quite some time, just as the lady in the cloud as taken the form of the crane and Kumiko. Now the volcano and the lady in the cloud argue as themselves. Finally the lady in the cloud performs the forgiveness ritual on the volcano. Rachel collapses when the volcano leaves her. JP tells George that Amanda is in the house and George tells Kumiko. She goes inside the house. Amanda is dead, but Kumiko and Amanda perform the forgiveness ritual. Amanda gets Kumiko’s heart and Kumiko receives the forgiveness she has been seeking. Amanda joins George and Kumiko takes Amanda’s place as the dead body found in the fire.

Afterwards, Rachel leaves town. Amanda is promoted to Rachel's job, and she creates a better working atmosphere for the women in the office. She also has a better relationship with her ex-husband. George is sad, but he becomes joyful when he receives the cutting of a crane made from a blank piece of paper and starts writing Kumiko’s story. He is happy when Amanda calls as the two of them can share the amazement of what has happened in their lives.

More summaries and resources for teaching or studying The Crane Wife.