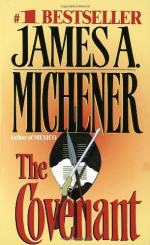 James A. Michener
This Study Guide consists of approximately 69 pages of chapter summaries, quotes, character analysis, themes, and more - everything you need to sharpen your knowledge of The Covenant.

The Covenant Summary & Study Guide includes comprehensive information and analysis to help you understand the book. This study guide contains the following sections:

This detailed literature summary also contains Topics for Discussion and a Free Quiz on The Covenant by James A. Michener.

The Covenant by James A. Michener is an epic tale that whisks the reader from the earliest days in South Africa and the San tribal customs and follows its growth and development through several key families right up to and including apartheid. It is a history lesson that is personalized so as to ingrain itself on you as you grow with each generation of the families involved. The Covenant is a remarkable piece of work, endeavoring to show all sides of an impossible situation and giving the reader an insight to issues that most of its own countrymen still struggle to understand.

When the Dutch first occupy South Africa, it is with the intention of creating a shipping link and a restocking port to aid in the control of scurvy and a host of issues associated with months uninterrupted at sea. Once a fort is established, the Dutch assume ownership of a land that they consider uninhabited by civilized people. It is many years before that concept is challenged with the discovery that Zimbabwe was built by the natives and not of Phoenician origin as originally thought. This made it difficult to pursue the argument that the natives needed the Dutch to civilize them and bring them out of the dark ages. The Dutch have a strong foothold on the Cape when the next set of immigrants arrive. Calvinists from France who flee their homeland because of religious persecution find new starts in Africa, but the Dutch prefer all traces of French be left behind. Already, racial disparity exists.

When the English take over South Africa, they have much the same intention. Now all South African people are to follow the Queen and forget their own heritage. School and Sunday worship is to be taught in English, and disagreements are inevitable. Many Dutch simply refuse to participate and leave their homes to trek deeper into the wilderness and begin again simply to protect their way of life. The numbers in South Africa increase exponentially when the English emancipate the slaves. The Dutch, believing each race has its place, argue that blacks should not be given the same rights as they. Soon it becomes clear that to make changes, the Dutch must become part of government and work from within. They educate their young both in school and as to their history and the bible's old testament. The next generation will get a toehold in government, and changes begin there. One man, Detleef van Doorn finds himself in charge of Racial Affairs and before long is introducing policies including segregation, racial separation, and the slow but steady reduction of rights for any colored person in South Africa. Having tasted freedom, reform that takes them backwards is not welcomed. It is the beginning of apartheid.

This is a story of human rights, of love, of freedom and enslavement. It is an ongoing land dispute and language dispute that continues to this day. A well told story that leaves the reader with lots to think about.

More summaries and resources for teaching or studying The Covenant.

The Covenant from BookRags. (c)2022 BookRags, Inc. All rights reserved.